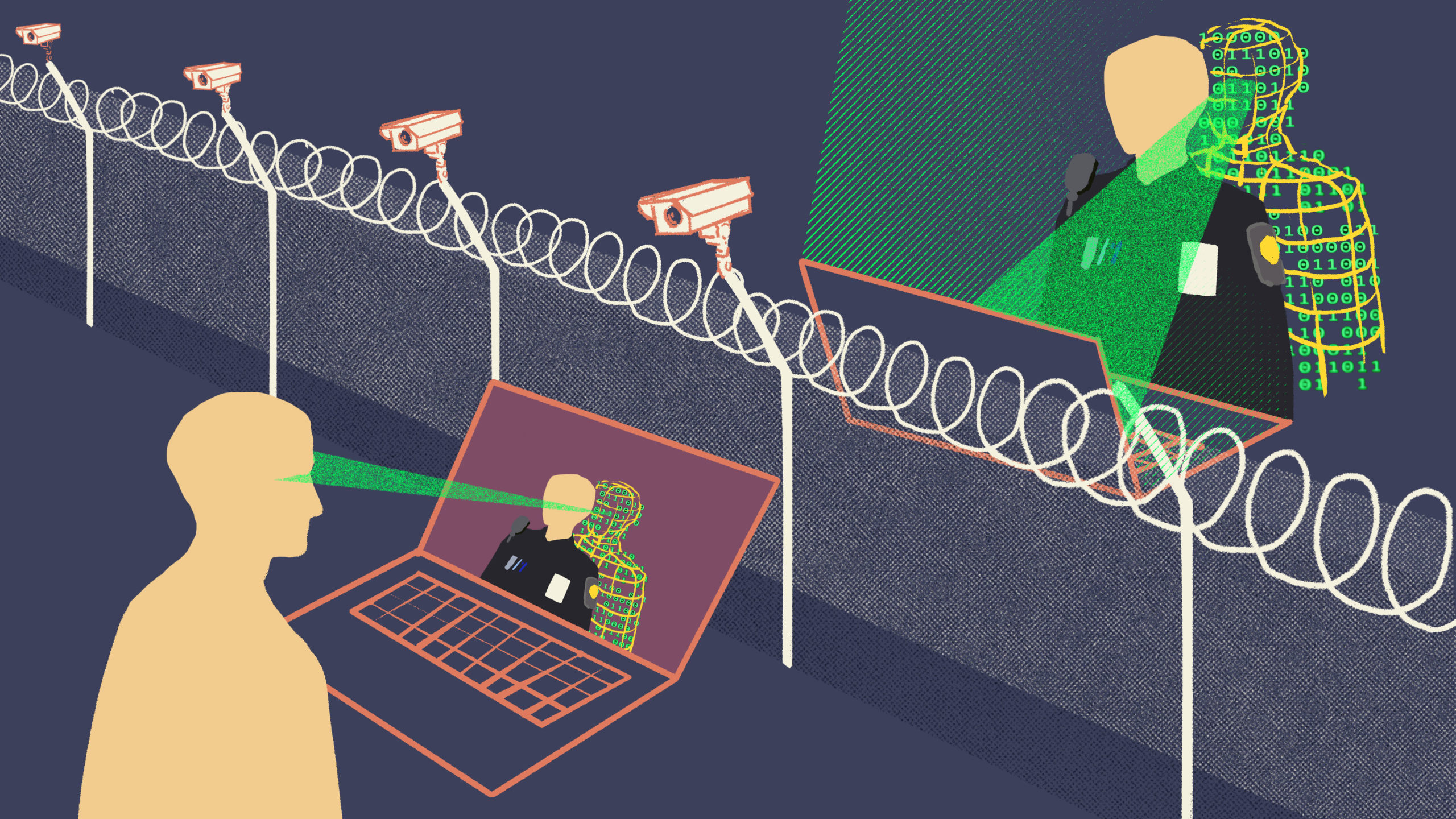 Face matching and digital avatars coming to the EU’s borders

Across Europe, leaders have been desperately seeking new ways to secure borders. Concerns over migration have contributed to the evolution of new forms of authoritarian technology

On the outskirts of Vienna, staff at the Austrian Institute of Technology are working on a project that could radically change border security within the European Union.

Developed by researchers at the institute, it is known as Foldout. Using ground and air sensors and drones, this new technology aims to detect migrants and human traffickers through forests, fields and other environments, in daylight and in darkness. It then alerts border patrol guards to their movements, via an integrated computer system.

Foldout is being tested in a two-year pilot scheme at a simulated border in Bulgaria, with future launches planned in Greece, Finland and French Guiana in South America. Costing $9 million, it is entirely funded by the European Union, which backs hundreds of similar projects.

The global border security system market is expected to reach a value of about $53 billion by 2022. In its 2014-2020 budget, the EU earmarked $14.2 billion for border security, but the body has almost tripled the sum to $38 billion for the upcoming 2021-2027 period. This huge injection of cash, made in the wake of Europe’s migrant crisis of 2015, has allowed a number of small, profit driven companies to access public money from the EU and individual states, in order to develop their products.

Often, funding is accessed by forming consortiums with research institutions and universities. Some politicians and activists, however, argue that many of these EU-funded projects fail to provide full transparency on their technology and implementation methods and that clear, quantifiable evidence of their success is scant.

Foldout joins another controversial surveillance project, called iBorder Ctrl, developed by a company named Silent Talker in 2015 by researchers at Manchester Metropolitan University. The project uses facial recognition and artificial intelligence to try to detect instances of lying from potential visitors to the EU. In recent years, concern over its technology and procedures has steadily grown.

“This technology is highly contested and scientifically unsound. That has unintended – and possibly harmful – side effects. Yet we are using public money to fund these projects in hopes of commercial success, with no thought for our citizens,” says Breyer.

With development partners from Luxembourg, Greece, Cyprus, the U.K., Poland, Spain, Hungary, Germany and Latvia, iBorder Ctrl uses a two-pronged approach. Before travel, users download an app, to which they upload pictures of identification documents, such as a passport, visa or proof of funds. Within the app, they then undergo an interview with a digital border-control avatar, which asks them about the reasons for their visit to the country in question. The avatar uses artificial intelligence to analyze movement and facial gestures, in order to determine whether they are telling the truth.

If potential visitors are flagged as high-risk by the avatar, border control officials at the port of entry then use a hand-held screening device, which compares visual images taken by the officials to those captured by iBorder Ctrl. Visitors are finally reassessed and their identities reconfirmed using methods including fingerprint scans, a palm vein scan and face matching before a decision is taken to allow them through.

Few people would dispute that border controls are necessary. If a potential visitor to a country has been convicted of a crime or is wanted by the police, it makes sense for agents to investigate them. According to Breyer, however, iBorder Ctrl’s checks are a risk since they are based on facial expressions, which could be wrongly flagged and lead to serious problems for individuals entering the EU in the future.

The Research Executive Agency denied Breyer full access to information about iBorder Ctrl’s components and implementation, on the grounds that the documents could reveal confidential trade secrets. Breyer is currently appealing the decision.

According to a report published by the European Commission in 2018, nearly half of the world’s 6.7 million asylum-seekers were registered in the EU between 2014 to 2016. This increase in global migration has unleashed political and electoral aftershocks across the continent.

Across Europe, leaders have been desperately seeking ways to secure their nations’ borders. Each member state has responded to the situation differently, but concerns over migration have contributed to a widespread backlash against migrants and the rise of populist politicians.

In Spain, the Vox party has won the first far-right parliamentary seats since the death of the fascist dictator General Franco by promising a zero-tolerance policy on immigration. In Italy, the former deputy prime minister and interior minister Matteo Salvini experienced a surge in popularity after barring humanitarian ships from the nation’s ports. Meanwhile, in Poland, the conservative Law and Justice party was recently reelected on a platform including strong anti-migrant positions.

The steps taken by some European nations have been little short of draconian. For example, in 2017 Bulgaria completed the construction of a border fence covered with razor wire, backed by $173 million of EU funding.

Meanwhile, nations such as Germany, Austria, Sweden, Denmark, France and Norway have temporarily reintroduced internal border checks, in order to counter perceived threats of illegal migration, terrorism and organized crime. Now, travelers to these countries from other EU nations might pass border checkpoints where their passports can be checked, just as they were before the days of freedom of movement.

In the aftermath of the migrant crisis, EU lawmakers decided technology was the key to controlling the flow of people into the bloc. As a result, the EU Commission has budgeted more than $1 billion between 2021-2027 for customs management technology, including automated license plate readers and surveillance equipment. In addition, the European Parliament announced last year that the EU Border and Coast Guard Agency, known as Frontex, will receive 10,000 additional operational staff to strengthen the EU’s border by 2027.

This echoes the rollout of similar technologies elsewhere. During the past decade, nations around the world have made enormous commitments to control their borders. In 2019, the United States pledged $23 billion to secure its frontiers – a 22% increase on the 2017 budget – with $182 million earmarked specifically for surveillance technology. According to the Carnegie Endowment for International Peace, 75 countries are actively deploying artificial intelligence to monitor their borders.

Martin Lemberg-Pederson of Denmark’s Aalborg University is an expert on global migration and the growing border control technology market. He is concerned about the implications of gathering and using massive amounts of private data.

“These border control programs are ultimately a tool to control the information of migrants and stamp on their rights,” he says

Breyer believes that in seeking to enforce ever-tightening border controls, EU nations are also riding roughshod over the rights of their own citizens.

“I can’t understand how the public can fund a project that treads on their civil liberties, but can’t get access to information on how their money was applied,” he says.

Interview requests made to the scientists behind iBorder Ctrl for this story also received no response. Freedom of information requests to the European Commission’s Research Executive Agency, asking for quantifiable evidence of iBorder Ctrl’s success of the technology were partially granted.

We received a heavily redacted copy of iBorder Ctrl’s Data Collection Device Report from the EC. Access to another report on analysis and ethics was, however, denied, partly because the information could “seriously undermine their commercial interest, including their intellectual property,” according to a letter from Barbara Kampis, a spokesperson for the Research Executive Agency.

The Data Collection Device Report details the rising frequency of migrants hiding in vehicles to cross EU borders, such as the 39 Chinese nationals found dead in 2019 in a lorry trailer that had arrived in the UK from Belgium. It discusses how iBorder Ctrl is developing radiation detection methods in order to prevent this. The sections on how this might be accomplished are redacted.

Researchers say that the lack of transparency displayed in the redaction of documents raises questions about ethics.

“Many of these projects are very, very ethically problematic and come with a lot of risks,” said Rowena Rodrigues of Trilateral Research, a UK-based body that assesses the ethical, legal and social implications of emerging technologies.

The Austrian Institute of Technology, where Foldout is being developed, declined requests to provide Coda Story with the name of the project’s Foldout’s lead researcher, or interviews with any of the nine researchers working on the project.

According to the institute’s spokesperson Michael Hlava, Foldout has complied with the EU’s requirements “within an ethical context” and regarding the “prevention of abuse and privacy aspects.”

For Breyer, however, the combination of the commercial nature of such projects and their public implementation will always be deeply troubling.

“Once these technologies are developed, using public money for private aims, the pressure becomes immense to make a profit and deploy them,” he said. “The technology can be used by private companies or authoritarian governments to erode the rights of citizens. We just don’t know where it will end up.”

Authoritarian Tech
Other Channels
Platforms like YouTube have tried to combat harassment against women. It’s not working 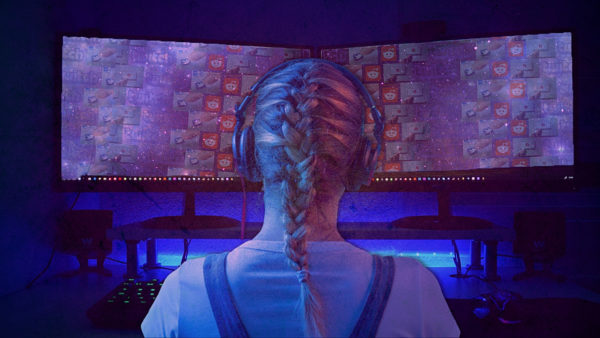