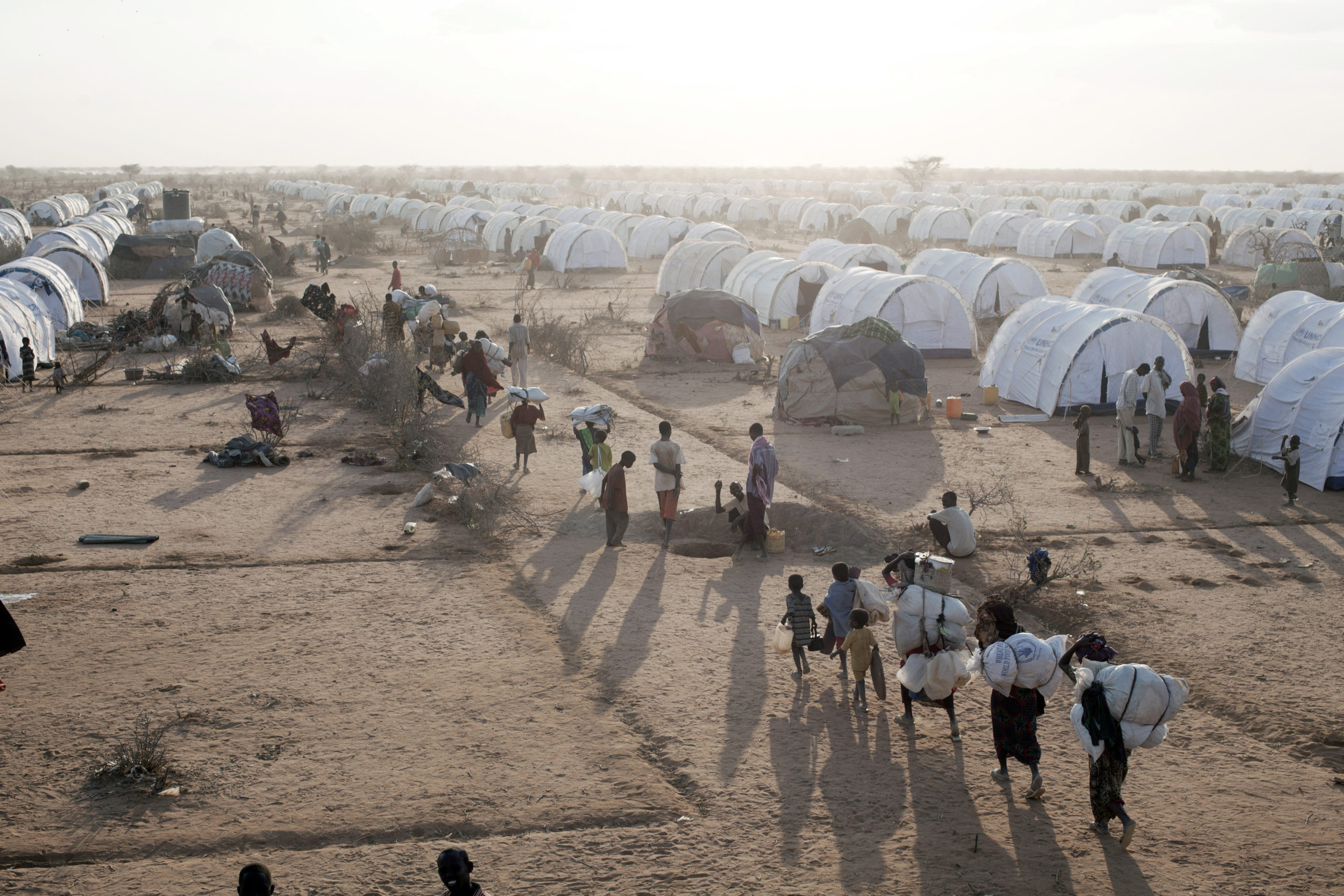 One radio presenter is using the airwaves to bring vital facts to Dadaab’s 217,000 residents

Every weekday morning, from 10 to 11 a.m., Abdullahi Mire hosts a radio show for the residents of Dadaab. His studio sits inside a converted shipping container, once used by the UN to deliver supplies to this sprawling network of three refugee camps in northeastern Kenya.

The 32-year-old community organizer, activist and writer is using his platform on Radio Gargar — the settlement’s only local station — to battle a surge of misinformation surrounding the Covid-19 pandemic.

He tells his listeners “don’t panic,” provides them with regular updates and brings on experts to dispel the myths around the virus. His voice has become so well known that people refer to him as the “Corona Guy.”

To date, Kenya has recorded just 2,862 cases of Covid-19 and 85 deaths. Largely cut off from the rest of the country, Dadaab — home to more than 217,000 people and one of the largest settlements of its kind in the world — looked like it had been spared.

That changed on May 18, when the Kenyan Health Ministry confirmed the first two cases of Covid-19 in the Ifo and Dagahaley camps.

A full-scale Covid-19 outbreak in Dadaab could be devastating. While the complex’s poor conditions create a perfect environment for the virus, Mire sees “ignorance and a lack of education” about the disease as an equally serious threat.

“Most of the community are not even concerned about the virus,” he told me by telephone.

“People say, ‘We are black, our sun is hot,’” in the belief that both factors offer some form of protection against infection, he explained.

Mire was just three years old when his family arrived in the camps, after fleeing the civil war in neighboring Somalia. He now runs the Dadaab Book Drive, an educational initiative set up by former residents, and has become a prominent local figure.

As with anywhere else in the world, it is difficult to pinpoint where the misinformation spreading through Dadaab originates, but social media networks, WhatsApp groups and word of mouth all play a part in its proliferation. Mire sees it as his job to present factually accurate narratives that are just as easy to understand and pass from person to person.

On air and social media, Mire “preaches the gospel” of washing hands and provides a steady stream of reliable information to residents on how best to protect themselves against the virus. He believes that radio is by far the best way to reach people in Dadaab — a view that makes sense when one considers Somalia’s age-old tradition of oral storytelling.

But, for the camp’s residents, taking even basic precautions against Covid-19 presents a huge challenge. “Dadaab is a place where you queue for everything,” Mire told me. “Social distancing is not something you can do here, when hundreds of people share just one tap for water.”

Dr John Kiogora, senior health coordinator at the International Rescue Committee, agrees. He explained that, owing to poor sanitation and overcrowding, refugee settlements — be they in Kenya, Lebanon or Bangladesh — are highly vulnerable to large-scale outbreaks of infectious diseases. He added that the density of Dadaab’s population is a particularly serious problem.

“Refugee families in Dadaab live together in tents and makeshift homes, and are confined together in small spaces without access to proper water, sanitation and hygiene, making conditions ripe for the spread of the disease,” he said.

Muhuba Hassan Hilow, a 52-year-old single mother, who lives with her eight children in the Dagahaley camp, faces these realities every day. For her, following even the most rudimentary hygiene and social distancing guidelines is an impossible luxury.

“We have very little water, no soap to wash hands, and just enough to wash our clothes,” she told me. “This is a disease God has brought upon us — all I can do is pray.”

Extra provisions have been made within Dadaab, including three isolation centers with a total of 800 beds and one ventilator, and case numbers have not risen since the initial confirmations. According to Eujin Byun, a spokesperson for the UN Refugee Agency in Kenya, “So far we haven’t had any cases of local transmission and contact tracing is ongoing.”

Mire hopes the figures remain static and is using every available means to pass on potentially life-saving facts to the people of Dadaab. He has helped with the translation into Somali of World Health Organization (WHO) information on Covid-19, which has been distributed around the camp in the form of leaflets and posters. He is now busy producing a radio play about the pandemic and has recently received a grant from the media development charity Internews to continue his work.

More often than not, he finds himself having to disprove ideas based on fake science — that the virus does not affect Somalis or that five daily Islamic prayers will protect individuals against infection, for instance.

However, a number of darker theories are also common in Dadaab. While some residents do not take the disease seriously, many others are terrified by it. This fear has been directed at “ foreigners” and those who have recently travelled abroad.

“Some believe that it originated in the West,” Mire told me. “There are also rumors that these cases were caused by international aid agencies to make money.”

Sixty-four-year-old Hassan Mohamed Yusuf lives in Dadaab’s Hagadera camp. Having fled Mogadishu 16 years ago, he is now the father of six adult children and grandfather to 13 more. He explained that whenever someone comes in from the outside world, terror grips his neighbors.

“Everyone is very scared. People literally run away from them shouting, ‘This guy is a foreigner,’ or ‘He has recently been to America,’” he said.

This tide of misinformation about Covid-19 is not unique to Dadaab.

In May, the WHO warned that Africa could be hit with 44 million infections and 190,000 deaths. In April a survey of more than 3,000 people carried out in Somalia by Save the Children showed that 42% of respondents believed Covid-19 to be part of a “government campaign.” Aid workers and peacekeepers have also been attacked by angry crowds in the Central African Republic, as foreigners are increasingly seen as a key vector of infection.

Kenya is one of Africa’s refugee hotspots. The nation hosts more than half a million displaced people, most of whom have escaped conflict in Somalia and South Sudan.

Mire worries that this fear of outsiders will also be projected onto them. He said that the Kenyan government “does not fully trust refugees,” and that members of this vulnerable population are likely to find themselves being scapegoated as carriers of the disease.

On May 16, President Uhuru Kenyatta issued a directive sealing Kenya off from Somalia. Prior to this, in late April, the government had placed camps such as Dadaab and Kakuma in the northwest of the country under strict lockdowns, in an effort to stem the potential spread of Covid-19. Travel in and out of the camps has been stopped, with permission granted to aid workers on a case by case basis.

The Kenyan government has previously threatened to close down the Dadaab complex entirely — most recently in March 2019 — but has rolled back its plans every time. Now, Mire and many others fear that politicians may seize opportunities provided by the pandemic to further this agenda.

As it stands, Dadaab is now more isolated than ever. Since the WHO designated Covid-19 as a global pandemic in March, “no one has told us much about the virus,” Yusuf said. “Everything has shut down and the aid workers are nowhere to be seen.”

“I am so scared because I have diabetes, and I have heard that people like me will be most affected,” he added. “We have very little, and no healthcare here. This will finish us.”

Yusuf has, however, taken Mire’s announcements to heart. Despite warm greetings being a big part of Somali culture, after listening to the advice on Radio Gargar, he now no longer shakes hands with people when he meets them. Proof that the message is working.

Disinformation
Other Channels
‘I don’t see any future in Sicily’: How migrants have become scapegoats for the coronavirus crisis

dispatch
Ismail Einashe
Russia says it’s safe for refugees to return to Syria. They don’t believe a word of it