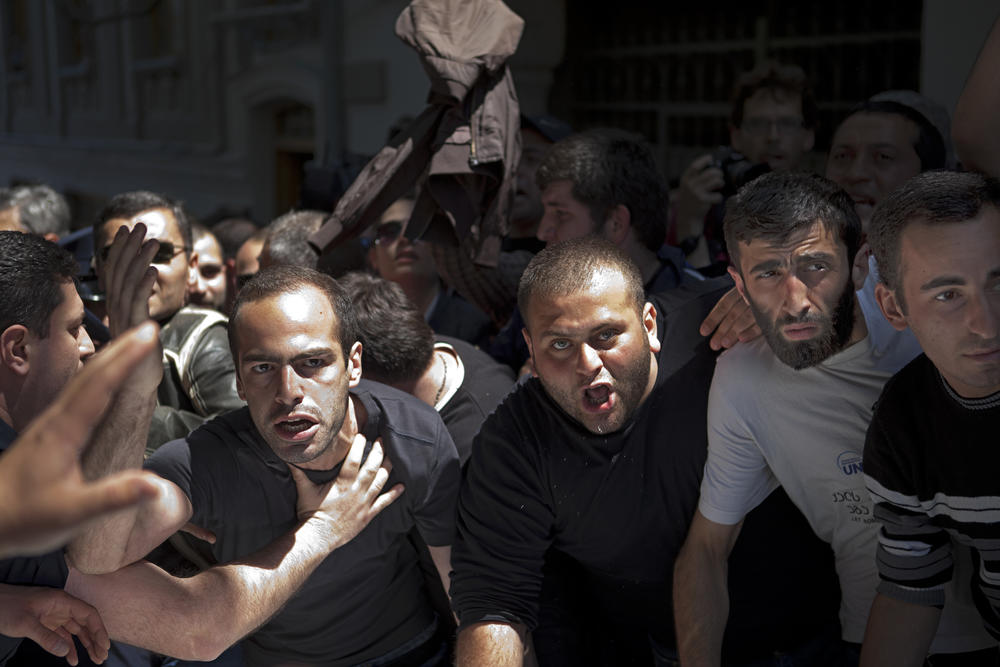 An anti-LGBTQ conference provides ecumenical and political unity among American, Georgian and Russian members of the religious right.

Leaders of the American and Russian Christian-right are converging in Tbilisi, Georgia on May 15 to attend a four-day summit called the World Congress of Families, perhaps the world’s biggest anti-gay symposium. The event’s program includes titles like the global “Demographic Winter” and the “Sexual Revolution and Cultural Marxism.” The program also touts gala dinners, city tours and “magnificent” Georgian song and dance numbers and an award for George W. Bush.

The convention, timed to coincide with the day of a violent 2013 mob attack on an anti-homophobia rally in Tbilisi, will be hosted by a Levan Vasadze, a dagger-sporting homophobic knight dressed in Georgian national attire. Vasadze participated and is alleged to have helped organize the 2013 attack that relegated Georgia’s nascent LGBTQ-rights movement to the periphery of national discourse.

Former President Bush, who will be given a nod at the convention with a “Family and Democracy Award,” was the first sitting US president to visit Georgia in 2005, when he described Georgia as a “beacon of liberty” in the region. While the country boasts many unprecedented freedoms in the region, the country severely suppresses its LGBTQ community.

To counter the symbolism of the May 17 anniversary of the mob attack on LGBTQ supporters as a day for celebrating gender and sexual diversity, Georgia’s Orthodox Church pronounced that date as the Day of Family. The Illinois-based World Family Congress subsequently announced its tenth annual conference would also coincide with the anniversary.

Anyone looking to more fully understand what brings the World Family Congress from the American Midwest to the Caucasus must get properly acquainted with Vasadze, the group’s choice for its convention’s emcee.

Emory University-educated Vasadze, given a knighthood by the remnants of Georgia’s royal family, has long focused on the procreative organs of fellow Georgians. Mixing a sexualized, scatological vocabulary with a quasi-scientific, moralizing lexicon has led Georgian critics to variably characterize him as a menace or a laughingstock. He is a frequent target in comedy shows and on social media.

He once declared that the pro-choice position on abortion made the “vagina, which should be paradise on earth for human beings…the most dangerous place to be.” Looped on the video sharing site Coub is Vasadze’s explanation of the classical roots of liberals: “Liber was a Plebian false god of the Aventine Triad of the Roman pantheon of false gods and he was distinct for his licentiousness and dipsomania.”

Liberals, like the vagina, portend death, according to Vasadze. “Tolerance is a term of Franco-Gallic medical school and means human organism’s ability to tolerate poison,” Vasadze pointed out in another TV interview. “It is the dead body that has perfect tolerance. It is very interesting where they [the liberals] want to take the national organism, don’t you think?”

When the World Congress of Families announced Georgia as the site for its next convention, Vasadze was present to accept the honor. “Up until now most people in Georgia believed that every Westerner who comes to Tbilisi works for George Soros,” he said, pausing for laughs. “And we would like to show them otherwise.”

Vasadze’s role in bringing the World Congress of Families to Tbilisi will help to lend an international flair to his crusade against liberalism. But Georgia is an odd venue for this US-led religious right retreat. Georgia’s Orthodox Church is harshly critical of Christian denominations in Europe and in the US; nonetheless, the veteran leader of the Georgian Church, Patriarch Ilia II, will address the gathering, which includes Mormons among its donors.

The convention’s anti-choice, anti-LGBTQ agenda seems to provide a degree of ecumenical and political unity among American, Georgian and Russian attendees. And in fact, the World Congress of Families has close ties with Russia. The coalition was conceived, in its own words, “on a cold winter night of the 1995” in Moscow, in the apartment of Anatoliy Antonov, a sociology professor. Anatoliy and his American guest, Iowa-born historian Alan Carlson, and a handful of concerned Russians came up with the idea to launch a global conference to protect heterosexual, procreative marriage.

Carlson, president of the Howard Center for Family, Religion and Society, went on to midwife the birth of the World Congress of Families. Picking up partners around the world, the organization developed into a driving force “behind the US Religious Right’s global export of homophobia and sexism,” according to the Southern Poverty Law Center, an Alabama-based civil rights group. With a $200 million annual budget, the World Congress of Famlies is now a partnership network backed by a slew of US religious groups, such as the Alliance Defending Freedom and the Knights of Columbus.

The coalition has had a particular impact in Russia, where it forged a Bible Belt-to-Kremlin collaboration around its anti-choice and anti-gay agenda. “The Kremlin used to be a no-no for conservatives, we are going to redeem that building,” said World Congress of Families Vice President Larry Jacobs in 2013, when its convention was held in Moscow. The group has held a number of events and lectures across Russia, and has endorsed Russia’s controversial 2013 law that restricts public discussion and displays of homosexuality.

American civil rights groups say that the World Congress of Families exports hate to Russia, a country already difficult for LGBTQ people. “WCF backers include Russian officials, who were sanctioned by the US government following Russia’s annexation of Crimea,” said the Human Rights Campaign, a Washington-based LGBTQ rights advocacy group.

The World Congress of Families counters that Putin sets an example for the US to follow. “How sad and ironic it is that the Russian president…is the one defending laws and morality consistent with the freedom in the US Constitution while our socialist American president has launched an all-out assault against religious freedom and the moral and religious people of American,” said Jacobs, the group’s vice president, while expressing support for the jailing of Pussy Riot, Russia’s feminist punk rock protest group.

As it descends upon Georgia, the World Congress of Families, wittingly or not, might be helping a Russian foreign policy agenda in the region. Fanning the flames of homophobia has long been Moscow’s soft-power way to urge its former Soviet satellites, including Georgia, to distance themselves from the West. Before Georgia signed an Association Agreement with the EU in 2014, the Russian propaganda machine was put into gear, describing the landmark treaty as essentially Georgia’s gay marriage with Europe. Brussels had to issue public assurances that the treaty, meant for political and economic harmonization, does not contain any fine print requiring Georgia to allow same-sex marriages.

In reality, same-sex marriage is a non-issue in Georgia, where LGBTQ people cannot gather safely in public much less demand marriage rights. Nevertheless, some of the country’s own politicians run on an anti-gay marriage platform, pandering to widespread conservative attitudes and the position of the much-revered Georgian Church. A pending parliamentary vote seeks to amend the Georgian constitution to state that lawful marriage is limited to opposite-sex partners.

“Would you want such marriage in your family, men in bridal veils, hairy, bearded men?” asked Tamaz Mechiauri, of the Georgian Dream Party, when asked to explain the reasoning for the bill.

A longtime Georgian LGBTQ rights activist, Irakli Vacharadze believes that the agenda behind the bill banning gay marriage is to expose pro-gay political rivals to an anti-LGBTQ electorate. “Controlling your butt” is going to be one of the campaign themes in the highly contested election this fall, said Vacharadze.

Vacharadze thinks none of this augurs well for Georgia’s pro-Western, liberal-minded political factions. Coordinated or not, the agendas of the Kremlin, Georgia’s hardline politicians, the Church and the Vasadze crowd overlap, and this could have implications for Georgia’s lurching attempts to create a modern, liberal democracy. Against this backdrop the World Congress on Families will conduct its annual conference in the very time and place where three years ago a crowd led by priests brutally crushed a modest call for tolerance and acceptance.

The nation’s small but vibrant LGBTQ rights community is bracing for the impact, but denied a public space for debate their options to respond are limited. 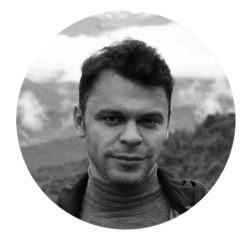 Giorgi Lomsadze is a freelance reporter covering news from the former Soviet Union with an emphasis on politics. The South Caucasus is his main focus. He covered the region for over 15 years and was published in many international publications.

Kremlin Influence
Other Channels
A Violent Struggle Over National Identity 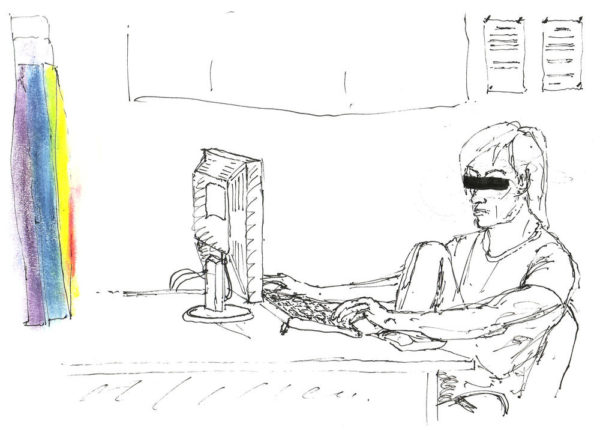 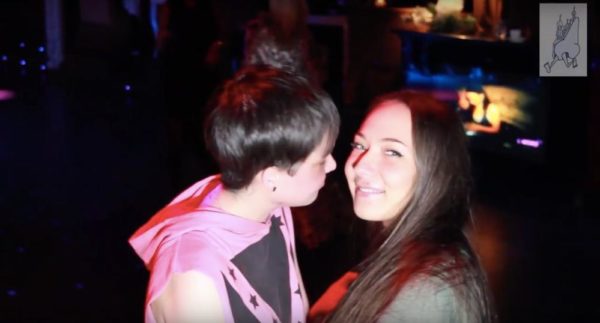