Anxiety in Afghanistan, applause vs. virus in India and a plea to Google from Moldova

Welcome to Coda’s Coronavirus Crisis newsletter for March 23. From new fears in Afghanistan to a massive disinformation attack in Moldova, we’re tracking the global spread of coronavirus disinformation, and what’s been done to combat it. Here are a few narratives – real and fake – that have caught our attention:

“Amid the Chinese anthem playing out in Rome, Italians chanted ‘Grazie, China!” wrote Hua Chunying, the director of the information department for China’s Foreign Ministry, who published a video on her official Twitter account that appeared to show Italians applauding in gratitude to China while the Chinese national anthem played in the streets of the capital.

Italians may be grateful for the humanitarian aid that China has been sending to Italy, but the video is fake: the Chinese anthem has been (rather crudely) edited in.

China is not the only one using the coronavirus crisis to extend its geopolitical influence.

After Vladimir Putin’s call with the Italian Prime Minister Giuseppe Conte this weekend, Russia began flying medical help to Italy, an operation it dubbed “From Russia with Love.”

On Monday, the Russian embassy in the UK tweeted that “Russia to send eight medical teams of nearly 100 virologists and epidemiologists with medical equipment and disinfection systems to assist in combating #coronavirus.”

Meanwhile, our reporter in Moscow has been speaking to doctors who say they don’t have enough basic protective equipment like face masks and gloves to deal with the growing numbers.

Authorities say that’s not true and are taking measures to tackle “Covid-19 disinformation.” Media organizations and private citizens are under scrutiny: a woman was fined for a social media post about the spread of the virus in Russia’s Amur region. Another, in Nizhnekamsk, is being sued after sharing rumours of a looming lockdown of the town on Whatsapp. We’ve counted seven incidents so far, and will keep tracking them.

“Wash your hands after watching TV” — a Russian columnist issues this disinformation health warning. Her piece argues that state disinformation on Covid-19 can be as dangerous for health as the virus itself.

In India, major cities, including New Delhi and Mumbai, have now gone into a lockdown that will last until March 31. It began with a 14-hour curfew over the weekend accompanied by viral fake news claiming that 14 hours would be enough to break the virus.

On Sunday, the government also issued a bizarre request: everyone was asked to bang plates and clap from their windows and balconies in unison at 5 pm to celebrate health care workers. (The doctors themselves, meanwhile, politely asked for equipment and resources instead.)

Around the same time, our reporter spotted an interesting theory floating around his Indian family’s WhatsApp group that had also been shared by influential figures like legendary Bollywood actor Amitabh Bachhan: Prime Minister Narendra Modi’s mass clapping strategy, it went, was to use the “cumulative vibration” caused by all the clapping and bells to “encourage blood circulation in the body,” thus forcing the virus to “lose all potency.”

Here’s a fact check of this by India Today.

Journalists and activists in Moldova say they are battling an “enormous wave” of pandemic disinformation. A think tank called “WatchDog.MD” has recorded a big number of newly created websites spreading Chinese and Russian propaganda as well as click-bait conspiracy theories that seem to be designed to drive traffic. The thinktank is appealing to Google for help:

“I think Google can substantially decrease the number and impact of these malicious activities through a temporary prohibition of approvals for Google ads accounts for newly established websites. A one-month suspension can really demotivate this malign activity,” Valeriu Pasa, one of the creators of WatchDog.MD, said in an email.

First cases of Covid-19 have now been reported in Syria and in Gaza. This piece in Arabic-language Metras talks about the disaster that Covid-19 looming in the overcrowded and densely populated Gaza Strip.

We have more on the Middle East below, so keep reading!

Our editor Burhan Wazir has been looking into a massive wave of disinformation surrounding the coronavirus outbreak in the Middle East, and in particular how it is used to fan geopolitical rivalries.

“Last week, the Saudi journalist Noura Al Almoteari, put out a tweet saying Qatar has known about the existence of Covid-19 since 2015. Earlier this month, she accused Doha of paying billions to China “to grow the virus,” Burhan writes.

Burhan’s reporting on the geopolitics of coronavirus in the Middle East is available on Coda Story.

In the meantime, Ryan Grace at the Middle East Institute writes in a fascinating piece dissecting the role disinformation played in the spread of coronavirus in the region that at the end of February, Ayatollah Ali Khamenei brushed off the spreading virus, blaming “enemies” for “negative propaganda” aimed at stopping people from voting in parliamentary elections. Regional business leaders also tried to quell anxieties:

The CEO of Qatar Airways dismissed the transmission of the coronavirus as a “fear fact” and not a legitimate threat. In Egypt, concerns over the virus’s impact on the tourism industry may have played a role in the government’s muted  reporting thus far,” Grace writes.

But the spread of the virus seems to be forcing authoritarian regimes into more openness about the pandemic.

That’s the pattern we are beginning to see in Russia, and here’s an example from Iran: at the end of last week, Iran’s health ministry spokesman Kianush Jahanpur sent out a shocking tweet saying that “Every ten minutes someone dies from the coronavirus in Iran, every hour 50 new people are infected.”

The impact of the disastrous situation in Iran is increasingly being felt across the border in Afghanistan.

Millions of Afghans have moved to Iran for work and refuge over the past decades while their country has been mired in conflict.

But now tens thousands of Afghans are fleeing each week, believing they will be safer back home — prompted by Afghan media reports that Iran’s overwhelmed hospitals are refusing them treatment.

At least 100,000 Afghans have already crossed the border, and now the authorities fear this could lead to a mass coronavirus outbreak in Afghanistan, overwhelming its already stretched health-care system.

Only returnees with fever are being tested at the border, our sources say — and now these people are spreading out far and wide across Afghanistan, as they return to their towns and villages.

Here are a couple of things from Coda and elsewhere to keep you going:

“Getting mobile hairdressers at home? What the f*** do you need this for? Do you understand that your casket will be closed? No one will see your hair,” is one of the pleas.

Stay healthy, and look out for the next edition of the newsletter on Wednesday.

We’re looking for tips on where to dig deeper into coronavirus disinformation. Please write me with any ideas, questions or feedback at [email protected]

Infodemic
Other Channels
The Roe v. Wade leak is bringing an onslaught of medical misinformation and dangerous DIY interventions 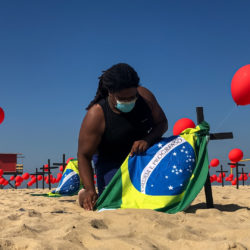