Infodemic: Unrest in Belarus, Zimbabwe in tatters and platform-hopping conspiracists

Welcome. We are tracking how global disinformation is shaping the world emerging from the Covid-19 lockdown. Today, we take you from Minsk to Harare, with a stop in Kenya and a hop around big tech platforms. Here are the latest narratives — both real and fake — that have grabbed our attention and deserve yours.

Extraordinary demonstrations are rocking Belarus, Europe’s last dictatorship. In the run-up to presidential elections on August 9, thousands have taken to the streets in support of opposition candidate Svetlanata Tikhanovskaya. After 26 years in power, strongman leader Alexander Lukashenka is suddenly on shaky ground. What got him there? A crumbling economy, a recent crackdown on the opposition and, according to our sources on the ground, the fact that he didn’t take the pandemic seriously. Lukashenka dismissed the dangers of Covid-19, kept businesses open and urged his security services to investigate those spreading information about the virus that contradicted official narratives.

Zimbabwe is also in the midst of a political and economic crisis accelerated by the virus. Since the pandemic began, the nation’s currency has collapsed and President Emmerson Mnangagwa’s regime has launched a crackdown on opposition and dissent. In anticipation of protests scheduled for today, the government deployed soldiers to the nation’s streets. There have also been widespread reports of activists being arrested and abducted. Meanwhile, health workers are on strike in protest against low pay and lack of PPE, and citizens are increasingly turning to traditional medicine in the absence of reliable healthcare. Disinformation has also been spreading via WhatsApp and other platforms, including the claim that Black people are less susceptible to Covid-19 and that it can be cured with a hot bath.

Kenya is the latest example of how Covid-19 can undermine vaccination programs worldwide. The government says more than 400,000 girls have now missed out on the HPV vaccination program launched last year to combat cervical cancer, one of the leading causes of female death in Kenya. The HPV inoculation has long been a target of anti-vaxxers — as we investigated back in June  — and now the pandemic has only amplified these theories. For more on how conspiracy theorists are outsmarting tech companies by jumping from platform to platform, keep reading.

The pandemic has put the conspiracy machine into turbo mode. Over the past month we’ve seen a resurgence of elaborate theories about Hillary Clinton,  “PizzaGate” and an apparently rightful King of England living in New Zealand.

As social media use rocketed during months of global lockdown, so has disinformation. And platforms have pledged to do more to combat it.

At the tech antitrust hearing in Washington D.C. on Wednesday, the CEOs of Apple, Google, Facebook, and Amazon testified before Congress, arguing that their platforms did not constitute monopolies. During his prepared statement, Facebook CEO’s Mark Zuckerberg said the company had “more to do” when it came to fighting disinformation. “We have dramatically improved our ability to proactively find and remove harmful content,” he said.

But conspiracy theorists learned long ago to bounce from platform to platform, as social media companies try to clamp down on disinformation.

I’ve been tracking these ongoing migrations since before the pandemic. In November, I spoke to anti-vaxxers who had fled Facebook in favor of Instagram’s more lax controls on anti-science content.

When Covid-19 got underway and anti-5G conspiracists started spreading false rumors about a link between cellular technology and the virus, proponents of the theory splintered as Facebook began to shut them down. One told me, “We’re going to Telegram.”

Now, the platforms of choice are TikTok and Twitch, and the conspiracists are getting younger. “People with TikTok accounts discovered PizzaGate almost like it was a historic, semi-folkloric piece of information, almost like MKUltra or weird Cold War experiments,” said Joe Ondirak, a researcher at Logically, a UK startup tracking disinformation.

Ondirak then explained how the TikTok version of the sprawling QAnon theory is tailored to the political ideals of teenagers and less focused on advocating for President Trump. “It’s diluted of its partisanship,” he said.

During an online forum on vaccine misinformation held by the Royal Society that I attended this week, the tone occasionally lapsed into despair. “The problem is, anti-vaxxers will always find another, newer way to spread their message,” said one participant.

Then someone asked, “But what are platforms doing right to counter fake news?” The question was followed by a long silence.

Don’t miss Coda’s Caitlin Thompson with an important story on why and how fringe leftists, led by Max Blumenthal’s The Grayzone project, are denying the scale of Beijing’s Uyghur oppression.

Caitlin digs into the anatomy and the dangerous consequences of their narrative, which has intensified since the pandemic.

My favorite bit is Blumenthal’s response to our requests for comment:

“We consider Coda Story to be a NATO propaganda shop wrapped in a boring neocon blog, so we’re not interested in any back and forth.”

For the record, we don’t accept funding from governments and tech platforms, but rely on foundation funders and the support of our readers.

Every dollar goes to supporting our journalism and every one counts. Many thanks to those of you who have contributed, and if you haven’t yet, click here to help us stay on the stories that are changing the world.

Have a great weekend, and see you on Monday. 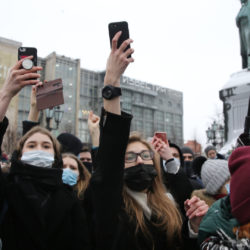