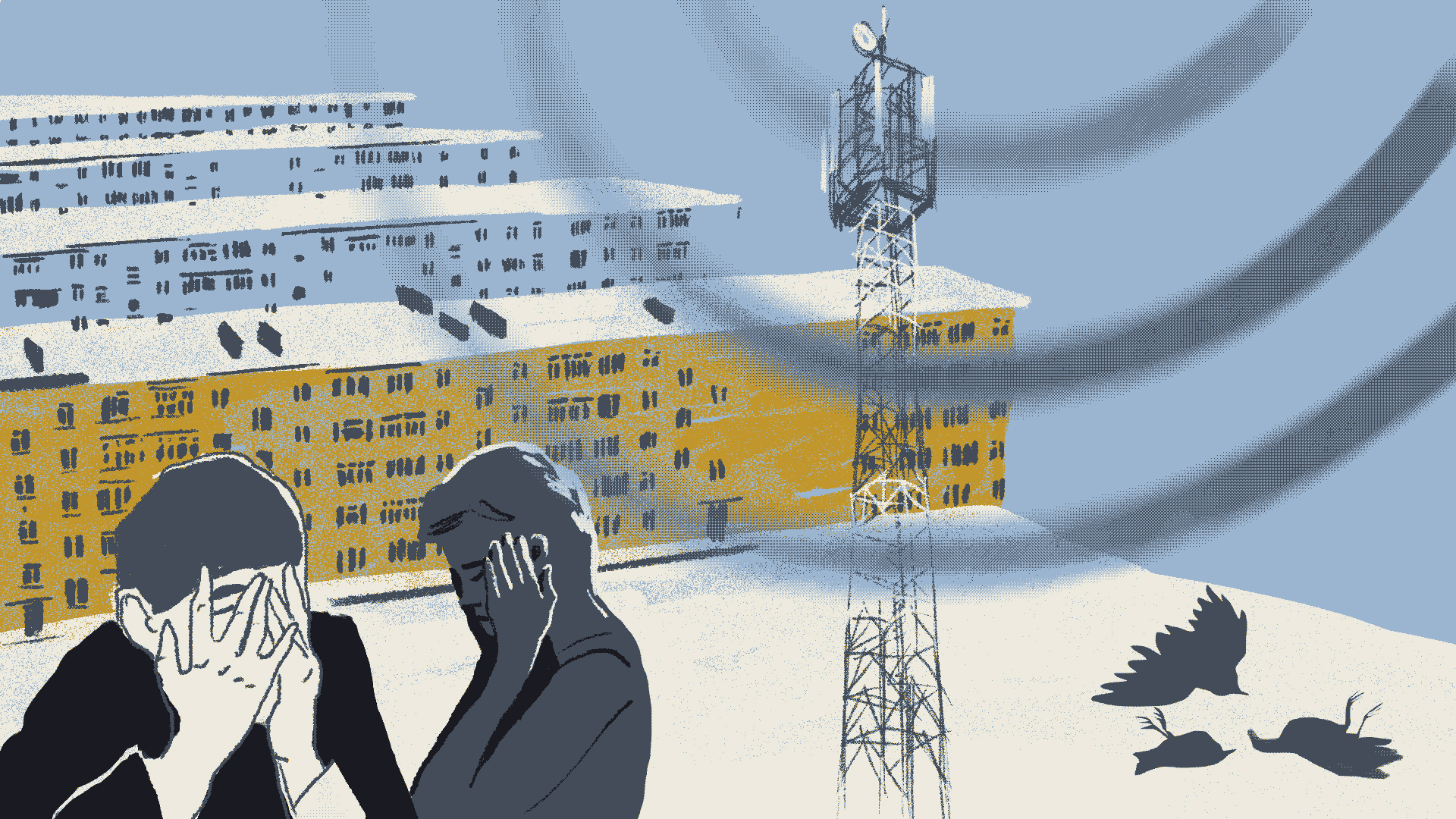 In a country widely viewed as the home of global disinformation, a Western conspiracy theory is flourishing

When video blogger Natalia Chernikhovskaya looked out the window of her Moscow apartment building she saw an antenna tower with white panels and a circular dish in the center. At first, she never suspected it could be the source of unexplained headaches and pains that she began experiencing this spring. Then she shared the symptoms with her 73,000 YouTube subscribers.

“Many of them responded that they were also experiencing headaches and that the pain would come in these waves,” she said.

Some of 42-year-old Chernikhovskaya’s followers then urged her to read about the side effects of radiation from cell phone masts. This was her introduction to the global anti-5G conspiracy movement. Reading hundreds of blog and social media posts from the U.S., U.K. and Europe, she quickly became convinced that there was a connection between the way she felt and what many identified as the catastrophic threat posed by developments in cellular technology.

While often cited as a leading source of global disinformation, Russia has proven fertile ground for this Western-born conspiracy theory. Against a backdrop of uncertainty and fear over the economic fallout of the coronavirus pandemic, the nation’s social media has over the past 12 months experienced a boom in anti-5G content.

Internationally, the theory’s adherents more or less agree that radiation emitted from cellphone masts leads to an array of health issues including headaches, insomnia, increased heart rate and the death of large numbers of otherwise healthy birds. Some followers also think that 5G towers are being erected as part of a covert scheme to subdue populations or to spread the coronavirus.

For many, including those in Russia, anti-mask narratives and coronavirus denialism go hand in hand with their beliefs. The most universal and foundational position, though, is that state authorities simply cannot be trusted. In many of her YouTube videos, Chernikhovskaya wears a homemade T-shirt bearing a graphic of a medical mask and the slogan “Covid-1984.”

Soon after she began investigating the movement, Chernikhovskaya — who works as a translator and is fluent in English — found an online prophet.

David Icke, a British former sports broadcaster, is a superstar of the conspiracy theory world. As the author of more than 20 controversial books, his personal appearances draw large crowds everywhere from the U.S. to Albania. His online videos alone have racked up more than 30 million views. The discovery of his anti-5G material came as a revelation to Chernikhovskaya.

One strand of the anti-5G movement proposes that Covid-19 lockdown measures were imposed around the world so authorities could install 5G masts without attracting widespread attention. In line with this idea, Chernikhovskaya believed she had identified a pattern between lockdown announcements in the U.K. and Russia and the rollout of the technology.

“I was really interested in all of this because in Russia we would hear the exact same lockdown announcements as in the U.K., just two days later,” she explained.

Anthropologist Aleksandra Arkhipova and her colleagues at Russian State University for the Humanities have collected and analyzed more than two million anti-5G messages posted on social media since January. Their goal was to examine the intersection between Covid-19 denialist movements and anti-5G activism.

Arkhipova believes that Russia’s anti-5G movement is largely composed of individuals who have lost jobs during the pandemic. This summer, Russia reported unemployment numbers not seen since 2012 and that the average family income has fallen to a level not seen in the past two decades.

Arkhipova also explained that latching onto the anti-5G movement can be almost “therapeutic” for people dealing with the fallout of the coronavirus, as it creates a “language” for them to speak out against what they see as wider failings of governments to protect society.

In light of what they view as state negligence regarding 5G, some activists have taken matters into their own hands. Dozens of social media groups, largely hosted in the Russian platform VK, now feature instructions as to how to dismantle 5G towers. They clearly reference as examples cases in which activists set fire to masts in Germany and the U.K. In the U.K. alone, more than 70 such structures have been attacked. So far just one has been burned down in Russia. The incident took place in May, in the North Ossetian town of Nogir.

“You look at England and Europe and you see birds falling and dying,” said Anatoli Shatunov, an anti-5G proponent from Shakhti, a city on Russia’s border with Ukraine. “It’s the same thing happening here, it’s radiation.”

In May, activists in the nearby port city of Rostov-on-Don made headlines by linking arms around a newly installed cell tower, refusing to allow technicians to hook it up, for fear that it would spread the coronavirus.

That same month, a woman in Dagestan called for a cellphone mast to be burned down, referring to it as a “second Chernobyl” in an Instagram video that attracted a total of more than 40,000 views. No one took up her cause and she faced no legal consequences for her words. This year, the region has reported a surge in fatalities attributed to pneumonia. Meanwhile authorities have at times reported just two or three coronavirus deaths, stoking doubts over the government’s handling of the pandemic.

Also prominent in Russian anti-5G circles is the Soviet Patriot movement. Members of this group live in an alternate reality, in which communism never fell. They are regularly arrested by authorities for refusing to pay taxes to the Russian Federation and some still carry Soviet passports as their only form of government ID. The involvement of this tendency follows a well-established pattern of disenfranchised individuals with a deep distrust of the state being particularly susceptible to conspiracy theories.

The Presidium of the Supreme Soviet, which Soviet Patriots consider the ruling body of their fictitious state, issued a recent resolution denouncing 5G technology. It explains that “it is paramount to prohibit the installation and use of all mobile cellular technology of the fifth generation, or 5G, across the entire territory of the USSR.”

While the Soviet Patriots may be nostalgic for the authoritarianism of the past, they reject the legitimacy of the Russian Federation and deeply distrust government initiatives, especially when it comes to technology. Some members believe that Moscow’s coronavirus lockdown in the spring was a ruse to keep people off the streets as government officials ran “radiation tests.”

However, Russia’s most popular anti-5G activist is Nikolai Mishustin, a 47-year-old, Moscow-based father of six children. Mishustin is a member of the Communist Party of the Russian Federation and regularly posts lengthy video addresses on a range of topics to his 27,000 VK subscribers. He saves his most vitriolic proclamations for Russia’s Prime Minister Mikhail Mishustin, who is no relation. The Prime Minister has championed nationwide digital reform as well as Moscow’s smart city program.

“The digital swindlers are using our president like a marionette doll,” Mishustin says in one of his videos. “The government is abjectly and cynically forcing this digital apocalypse upon us.”

In August, Chernikhovskaya demanded that city technicians check out the antenna in her courtyard. Most Russian municipalities provide residents with a service to check radiation levels near their homes. Outside Chernikhovskaya’s building, radiation proved to be well below average levels, immediately debunking her theories.

“I literally stood right there with them, walked up to the antenna and measured the levels in my apartment,” Chernikhovskaya said.

The technicians also informed her that there is only one 5G mast in the whole of Russia, located on Moscow’s central Tverskaya Street. It is also not yet operational. The city plans to roll out 5G no earlier than 2022, and there is, as yet, no plan in place for nationwide coverage.

While Chernikhovskaya is still suspicious about the health implications of 5G, the focus of her YouTube channel has shifted back to coronavirus skepticism. When she posted footage of the radiation inspection, she said she was surprised that the videos got fewer views than her anti-5G videos.

Those who did watch, weren’t happy and made their feelings clear in their comments.

“I received a flood of criticism, accusing me of being a turncoat, asking me why I was believing these people,” she said.

This reporting was supported by the Russian Language News Exchange. 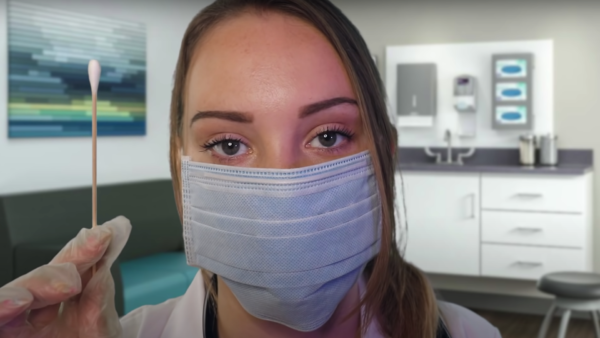 dispatch
Isobel Cockerell
The creep of pseudohealth into India’s hospitals 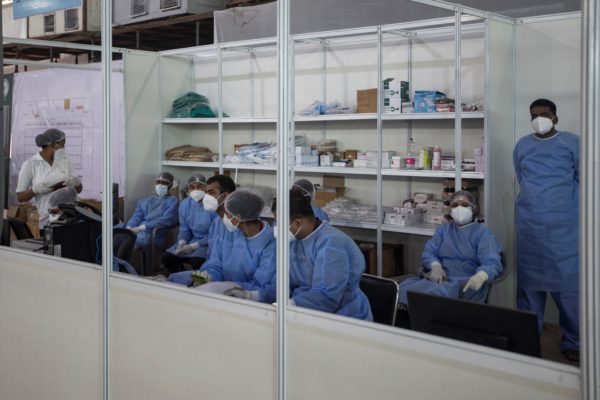