In a blog post, Mark Zuckerberg, the C.E.O. of Facebook, announced a major shift in the company’s approach to privacy. In the next few years, Zuckerberg writes, Facebook will put a much greater emphasis on encrypted and temporary messages among small groups of people.

“[P]rivate messaging, ephemeral stories, and small groups are by far the fastest growing areas of online communication,” Zuckerberg writes in a post published on March 6.

The biggest change Zuckerberg promises is encrypted private messaging. Taking a cue from Facebook-owned WhatsApp, this would make a Facebook message impossible to read for anyone but the sender and recipient. That means even Facebook couldn’t read the messages.

Encryption has downsides. This past summer, encrypted WhatsApp messages in India carried inflammatory content that fueled mob violence, killing dozens. WhatsApp eventually made it more difficult for messages to spread virally, but it kept its encryption. Zuckerberg acknowledged that similar dangers could come to Facebook.

“We are working to improve our ability to identify and stop bad actors across our apps by detecting patterns of activity or through other means, even when we can’t see the content of the messages,” he wrote.

Zuckerberg also acknowledged a recent uptick in data-localization laws, which force social media companies to store users’ data in the country where the user lives. The post promises Facebook would sooner leave a country than compromise user privacy.

“[W]e’ve chosen not to build data centers in countries that have a track record of violating human rights like privacy or freedom of expression,” Zuckerberg wrote, adding that “upholding this principle may mean that our services will get blocked in some countries, or that we won’t be able to enter others anytime soon. That’s a tradeoff we’re willing to make.”

Russia, for example, has threatened to block Facebook if it doesn’t move Russian users’ data to Russia. Though Facebook has been slow to do this, it hasn’t flat-out refused to localize its data.

Zuckerberg’s post presents a marked contrast to comments he made nine years ago, when he suggested that privacy as a “social norm” was fading. 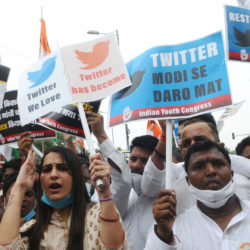 Outside the US, Elon Musk’s vision of a rules-free Twitter is expected to unlock violence and civil strife
feature
5m read
show more
News
11 December, 2019
Hour by hour: How disinformation swept the UK internet in the election’s final days
27 November, 2019
Sale of .org domain draws protests
27 November, 2019
Inside the China Cables: Video surveillance, confessions and ‘de-extremification’ in Xinjiang
27 November, 2019
‘Lash curl’ TikTok video about China’s detention of Muslims goes viral
22 November, 2019
In many parts of the world, internet freedom is in decline