Let’s say you’re attending a Silicon Valley reception and find yourself talking to an important-seeming person; you begin to wonder: am I just wasting my time, or am I talking to an investor who can bankroll my dumb startup idea?

Well, now there is an app that can answer your question. If you download AngelFace, all you’d have to do is discreetly pull out your phone, point it at your investor’s face, and the app will tell you whether they are an “angel investor.”

That’s the conceit, anyway. Though the app, launched last month, works fairly well — it did okay when I pointed it at some pictures of Silicon Valley luminaries, and even recognized Donald Trump — it was really built with novelty in mind. 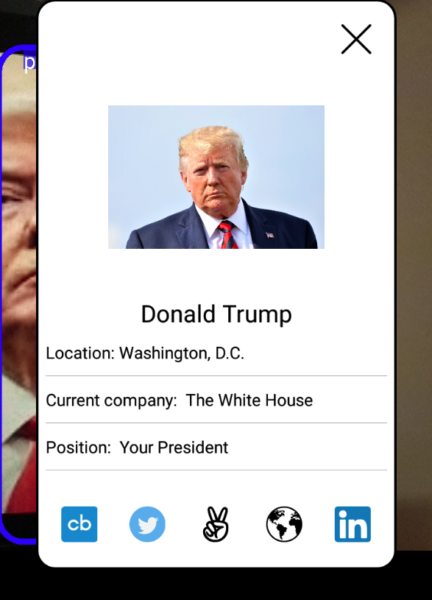 “We have no plans to monetize the app or turn it into a business,” co-creator Tosh Velaga told me. In an interview with The Verge, he called AngelFace “something stupid.” According to The Verge, the creators of AngelFace scraped photos of investors from Signal, a directory of venture capitalists in different industries, and Google Images.

This kind of tech — The Verge calls it peer-to-peer facial recognition — is one of those technologies that has long seemed on the verge of arriving. When Google Glass was having its moment in 2013, it’s a question that often came up: Would you soon be able to tell who someone is just by looking at them? Back then, Google seemed to settle the question by banning facial recognition apps from Google Glass.

“[W]e won’t add facial recognition features to our products without having strong privacy protections in place,” Google said at the time. But the tech continues to exist and improve. Chinese police have given similar glasses to officers, to identify suspects at a glance.

“I definitely think this type of peer-to-peer facial recognition technology needs to be regulated at least in some form,” he said. “I do think that on a much larger scale it is a threat to the general public’s privacy.”

For now, though, his app, at least, remains a party trick. To be sure, Velaga said, some people have pointed AngelFace at investors they ran into, “although it is too early to say how many users are actually using it for the intended purpose.”