23 August, 2018
Internet trolls and disinformation warriors intent on spreading political and social discord in the United States disseminated anti-vaccine messages on Twitter since 2014, according to a research report published this week.

The messages, which are associated with accounts known to be Russian trolls and the Kremlin-linked Internet Research Agency, masqueraded as legitimate Twitter accounts to “undermine the public health: normalizing these debates may lead the public to question long-standing scientific consensus regarding vaccine efficacy,” wrote the authors of the report.

“The Internet Research Agency has been known to engage in certain behaviors. There’s the one everybody knows about, which is the election. They also tend to engage in other topics that promote discord in American society,” David Broniatowski, one of the authors of the study, told CNN. CNN further reported that political organizations associated with Russian strategic aims, such as Italy’s Five Star movement, have promoted skepticism toward the scientific validity of vaccines.

Separately, Google announced it had joined Facebook, Twitter, Reddit, and other online platforms in discovering an Iranian effort to spread disinformation and political propaganda on its networks. Google said that it had removed 58 accounts on its platforms that had connections to the Islamic Republic of Iran Broadcasting, Iran’s state media company. Unlike the Russian disinformation campaigns that have sowed social division and interfered with elections across Europe and the United States, however, “the Iranian disinformation campaign was clearly more focused on issues important to Iran than issues that would stoke American unrest,” wrote April Glaser and Aaron Mak in Slate. 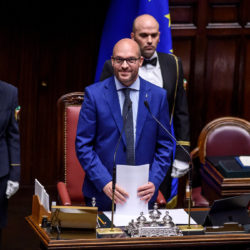