YouTube has announced it will block discriminatory content just a day after it said videos that promoted racism, sexism and religious bigotry did not violate its policy.

The move follows a viral Twitter thread posted on May 30th by Carlos Maza, a Vox journalist, who has been targeted by far-right YouTubers for his sexual orientation. He highlighted abuse by Stephen Crowder, the host of Louder With Crowder – a conservative comedy show.

Maza said he had “been called an anchor baby, a lispy queer, a Mexican, etc. These videos get millions of views on YouTube. Every time one gets posted, I wake up to a wall of homophobic/racist abuse on Instagram and Twitter.”

Maza focused his campaign towards YouTube demanding that the company protect users and enforce its own social media policies more vigorously.

YouTube’s original reply appeared to exonerate Crowder, saying their team had spent several days conducting a review of the flagged videos and had found the language was hurtful, but that the posts didn’t violate their policies.

However, the next day, YouTube shifted position – and possibly a key part of its revenue stream as a result. In an online announcement the company said it will evaluate its monetization policy to make sure it only benefits “trusted creators.

YouTube has, until now, taken a percentage of money spent on Super Chat, the system by which viewers pay extra for more features, such as commenting or asking interviewees questions. A Buzzfeed investigation into two videos featuring white nationalists, Richard Spencer and Mike Enoch, found they earned $4,000, including $5 for a commentator to write: “Once you go black, you’ll never get your society back. FACT.” This spurred criticism that YouTube was profiting from hate groups such as white nationalists.

YouTube’s actions follow a number of other social media sites shifting their practices to minimize hate speech, including a move by Twitter in 2017 to combat threats, acts and glorification of physical harm.

Critics of Big Tech say the moves are ineffective. “It is extremely difficult not to see the new YouTube policies in part as a way to change a negative PR narrative after refusing to address the harassment faced by” Maza, said Rebecca Lewis, an online extremism research at Data & Society.

Meanwhile, those who had their videos blocked took to Twitter to complain about censorship with Crowder particularly focusing on the loss of revenue, tweeting with the hashtag “#VoxAdpocalypse”, referring to the newssite Maza works for and the lack of funding through ads.

In a video posted to his Twitter that received 352K views, Crowder warned: “People will still have a voice, but a lot of people are going to lose their ability to make revenue.”

The company said some videos may remain viewable if they discuss topics like pending legislation, condemn or expose hate or provide analysis or current affairs. 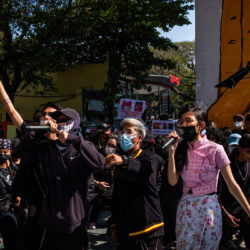