Belarusian leader writes Poles, Jews, other minorities out of WWII history in a bid for national unity

In Lukashenko’s version of WWII, Belarusian victimhood is central, and Russia’s victory defines the modern Belarusian state and its relationships to its hostile neighbors.

On the morning of August 25, throngs of military police descended upon a village called Surkonty in northwestern Belarus and proceeded to block all roads leading toward the area’s military cemetery, where members of Poland’s World War II resistance force, known as the Home Army, lay buried. Construction equipment was brought in, and authorities began to demolish the cemetery — graves and all.

“No one was allowed in because they were afraid that people would take pictures, protest, and block the work,” said Marek Zaniewski, the vice president of the Union of Poles in Belarus, relaying accounts from people who witnessed the operation in the predominantly ethnic-Polish district.

A Catholic priest was able to get inside the perimeter but was soon ejected, and authorities threatened people who tried to take pictures with prosecution. Later that day however, photos emerged online showing that the cemetery site had been leveled to the ground.

Zaniewski said when he heard the news, his initial shock soon gave way to despair.

“Surkonty is a very important place for Poles living in Belarus,” he said. “Its destruction was a very painful blow.”

The history of the Home Army is problematic for Belarusian strongman Aleksander Lukashenko and his pro-Russian regime. While the Home Army’s primary enemy during the war had been Nazi Germany, the fighters at Surkonty had been killed by Soviet soldiers in battle in 1944.

The destruction of the cemetery at Surkonty came one day after Poland demolished a Soviet-era monument. Western media framed the events as tit-for-tat retaliation, but the cemetery destruction wasn’t the first — at least five other Polish military cemeteries had been desecrated this summer.

The destruction of these Polish grave sites is the latest salvo in a broader, accelerating campaign to rewrite the history of World War II and the Holocaust in Belarus which Lukashenko has been waging since his 2020 crackdown on anti-government protestors, leaving him vulnerable domestically and isolated internationally. Lukashenko’s government has been building a new nationalist narrative that marginalizes minorities in Belarus in favor of a homogenous, Soviet-style national identity, and ties the regime’s challengers at home and abroad to the familiar Nazi enemies of the past.

The Lukashenko government’s relationship with Belarus’s Polish, Jewish, and Lithuanian heritage had fluctuated before 2020 — but now, amid the state’s mounting project of historical revisionism, not only have authorities increasingly been working to erase reminders of these peoples’ history in Belarus, but they have also hijacked the history of the Holocaust in Belarus to frame it as part of a genocide not of Jews, but rather ethnic Belarusians.

In this version of history, Belarusian victimhood is central, and Russia’s victory over Nazism during World War II defines the modern Belarusian state and its relationships to its hostile neighbors. On the ground, Lukashenko’s historical policy has translated into persecution of minority communities, the Russification of Belarusian national symbols, and fears of a dangerous new phase in Lukashenko’s ongoing effort to eliminate threats to his rule.

“They’re trying to create this atmosphere of us against the whole world,” said Hanna Liubakova, a Belarusian journalist, describing the government’s motivations. The goal is to arouse an us-versus-them mentality relying on memories of World War II. “There are enemies around us, and they are all trying to exterminate us, and this has happened before. That’s why we have to keep together and support this great leader.”

In January, Lukashenko’s government passed the Law on the Genocide of the Belarusian People, which proclaims that Nazi Germany carried out a genocide against ethnic Belarusians during WWII, defining Belarusian people as “all Soviet citizens who lived on the territory” of Belarus at the time. Anyone who denies any part of this narrative can face jail time. Israeli scholars warn that describing all victims of Nazi war crimes in Belarus, including hundreds of thousands of Jews, as ethnic Belarusians amounts to Holocaust denial.

“There’s no obvious corroboration for the idea that when the Germans came in they were out to get Belarusians,” said David Marples, a historian at the University of Alberta, who specializes in Russian, Belarusian, and Ukrainian history and has written several books on modern Belarus.

Yet this has not stopped authorities from trying to establish facts on the ground that support their narrative — Belarusian state media has reported that renewed excavations of WWII-era mass graves sites in the country have already begun, with the aim of uncovering “the whole truth” of the purported genocide against Belarusians.

According to Veranika Laputska, a Holocaust researcher and the co-founder of the EAST Center, a think-tank focused on the post-Soviet space, the Belarusian state has threatened to begin excavating Jewish grave sites as well, including at the Nazi death camp at Maly Trostenets, in order to inflate the number of victims who were killed there for political purposes.

“If they’re going to start re-digging these mass graves, it means that they will not only be distorting the memory of Belarusian Jews but also European Jews who were unfortunately killed on Belarusian territory,” said Laputska.

Lukashenko has set the stage to use the genocide law’s claims to go after his enemies.  In February, Lukashenko formally tasked General Prosecutor Andrei Shved, who had previously called the Polish Home Army “fascist criminals,” with hunting down alleged perpetrators of this genocide who had escaped punishment, calling it “a matter of historical justice.”

Shved’s office published in April a lengthy manuscript to support the genocide law’s conclusions and presents the purported evidence for Hitler’s campaign against Belarusians. It is a skewed, dubiously-sourced, and “amateurish” perspective on Nazi atrocities in Belarus, according to Marples, the historian, that undermines the realities of the Holocaust, and also implicates the Polish Home Army, Lithuanian forces, Latvian paramilitaries, and others as active parties to genocide alongside the Germans. The document also takes aim at the 2020 anti-government protestors, falsely claiming they wore Nazi insignia.

This might point to the government’s intentions to launch a future “denazification’ campaign,” said Laputska of the EAST Center, labeling neighboring states as Nazis and fomenting national opinion against countries like Poland and Lithuania. “And then, we don’t know what is going to happen.”

The recent grave destructions may indicate this leap has already taken place, said Denis Kazakiewicz, a journalist and analyst based in Brussels who is from the Polish-Belarusian community.

Vladimir Putin has frequently described Ukraine’s government and people as fascists or Nazis to justify his invasion of the country. “If you think that those people” — the Home Army —  “are Nazis, and the people who come to their graves are Nazis, that means that the state that supports those people are also Nazis,” said Kazakiewicz. “That means that the Russian and Belarusian state has the moral grounds to attack those Nazis as they do now in Ukraine.”

Lukashenko’s most recent hostility toward Poland and Lithuania stems from their support of the 2020 protests against his rule. After the presidential election, that year was deemed fraudulent by the international community, Lukashenko declared himself the victor and violently ended the protests. Sviatlana Tsikhanouskaya, the candidate who ran against Lukashenko in the presidential election, fled to Lithuania later that year. Poland, especially, has been demonized by Lukashenko as a bellicose, anti-Belarusian aggressor acting at the behest of the United States.

At least 288,000 ethnic Poles, around 19,000 Lithuanians, and nearly 13,000 Jews continue to live in Belarus, and Poles especially have increasingly become regarded by the state as a fifth column loyal to the West. In 2021, several prominent leaders of the Union of Poles in Belarus were put behind bars, including journalist Andrzej Poczobut and activist Andżelika Borys, on charges of “inciting national and religious hatred” and “rehabilitation of Nazism,” according to the Prosecutor General’s Office. They joined tens of thousands of Belarusian protestors who were arrested during and after the 2020 demonstrations.

While using history to vilify his enemies, Lukashenko is building an ideological bridge connecting Belarusian and Russian heritage. Lukashenko anointed the day the Soviet Union invaded Poland in 1939 a national holiday this year.

As Belarus has moved closer to Russia, Moscow has helped Lukashenko use history to pursue his political goals. In April, Shved and his Russian counterpart created a joint working group to “establish the circumstances” of the genocide of “the Soviet people.” Earlier this year, Lukashenko not only agreed to let Russia launch attacks on Ukraine from Belarusian territory, but also to host Russian troops and nuclear warheads indefinitely.

Uladzimir Vialichkin, the head of the local branch of the human rights organization Viasna in the western Belarusian city of Brest who fled the country in 2021, said Belarusian authorities have been chipping away at vestiges of Brest’s Jewish and Polish heritage for years, and although efforts have been made by foreign organizations to preserve evidence of Jewish cemeteries and document desecrated Jewish gravestones in the city, amateur guides who’ve drawn attention to this history have been harassed by authorities.

“The goal of this is singular,” Vialichkin said. “That this is Russian territory, a Russian city, Russian everything.”

In Surkonty, ethnic Poles have erected wooden crosses on the site of the military cemetery several days after it was desecrated. According to Zaniewski of the Union of Poles in Belarus, even these were removed by authorities, and in September another Polish grave was reportedly found destroyed.

“Destroying a cemetery doesn’t destroy the memory of people,” Zaniewski said. “Those crosses will rise again.”

But as Vialichkin witnesses more graves getting desecrated, memorial inscriptions being altered, and more of the country’s history shifting before his eyes with each passing year, he has doubts.

“The witnesses of these crimes naturally die off, and now there’s no one left to challenge this,” Vialichkin said. 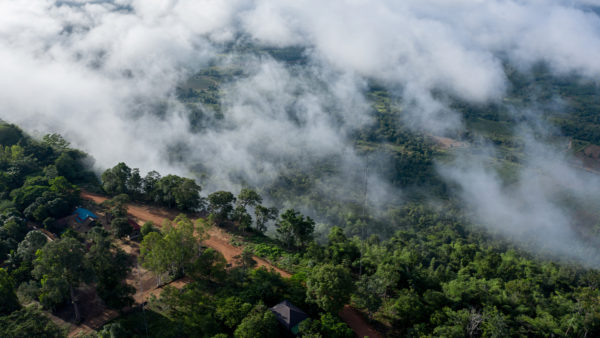