Welcome back, and a very special welcome to all our new subscribers. We are tracking how global disinformation is shaping the world that is emerging from the lockdown.

Coronavirus may no longer be the only news on our screens, but infection numbers are still rising around the world, and disinformation about Covid-19 continues to spread. Below are a few narratives — both real and fake — that have grabbed our attention and deserve yours.

“Do not lie, do not steal, do not betray!” That’s the best antidote to coronavirus, according to President Andrés Manuel López Obrador of Mexico. When asked why he is not social distancing, he says that he doesn’t need to, because he is a good person. This accentuates the government’s confusing messaging, amid rapidly rising coronavirus cases. Another example: Face masks are mandatory but Obrador’s home secretary doesn’t wear one. Instead, Sánchez Cordero says that she uses “citrus-based nanomolecules” to protect herself.  A few drops, according to her, are enough to destroy viruses. Meanwhile, a month ago Alejandro Giovanni López, a bricklayer was arrested and detained by police for not wearing a mask on a public road. Hours later, he was reported dead. If you read Spanish, Animal Politico has good context here.

Australia’s flagship 60 Minutes show is in trouble for giving airtime to coronavirus conspiracy theories. On Thursday, it aired a segment with Australian celebrity chef Pete Evans — also known as Paleo Pete — who has recently switched from peddling anti-vaccine propaganda to Covid-19 disinformation. Last month, Evans was hit with a $25,000 fine by the Therapeutic Goods Administration for promoting a $15,000 light machine as a remedy for what he referred to as the “Wuhan coronavirus.” A few weeks later, Australia’s Channel Seven dropped Evans from the “My Kitchen Rules” cooking show, on which he was a judge for 10 years, owing to his controversial health claims.

In Japan, deputy Prime Minister Aso Tarō used the racist colonial term “mindo” to explain the nation’s low number of coronavirus deaths. “Mindo” means “level of civilization” and it is a term that Japanese used to justify the colonization of Korea from 1910 to 1945. Responding to public criticism over use of such a loaded word, Taro said that he just wanted Japanese people to be proud of the fact that their country was able to control its Covid-19 death toll.

And a bit of good news, for a change: it has taken ages, but Facebook is finally starting to label state-controlled media on its pages. The company spent months studying ownership structures of media companies around the world and trying to figure out what qualifies as “state-controlled.” Here’s the criteria they’ve come up with. Insiders say, “Places like China were easy, but we struggled with companies like Al Jazeera” that have high editorial standards, but are nevertheless state-controlled. It looks like Al Jazeera will be flagged, but we’ll know more as the company starts rolling out the measure more widely. They’ve already started in the United States. Definitely one to watch.

Anti-vaxxers in Africa: A couple of weeks ago, we reported on a debate about vaccination in Nigeria, fuelled, in part, by a controversial interview broadcast on French TV.

LGBTQ shaming in Putin’s refrendum: Earlier this week, we reported on a jaw-droppingly homophobic video, designed to get people to vote for constitutional amendments that will keep Putin in power until 2036.

On the other side: the lockdown has created an unexpected opening for Russia’s LGBTQ community. Check out this piece by our reporter Isobel Cockerell and Magnum’s Thomas Dworzak, who have been hanging out at secret Zoom parties.

It takes a team to bring you this newsletter: Gautama Mehta, Rachel Sherman, Chaewon Chung, Sasha Tyan and Dave Stelfox have all contributed today. Here are a couple of their recommendations:

And my recommendation is for you to dig into Coda’s original reporting on issues that are shaping the world we live in. We always want to hear what you think, so hit reply anytime if you have questions, tips or feedback.

Thank you for reading, and see you next week! 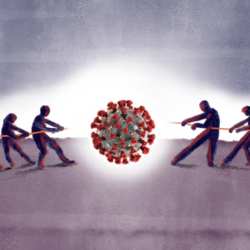