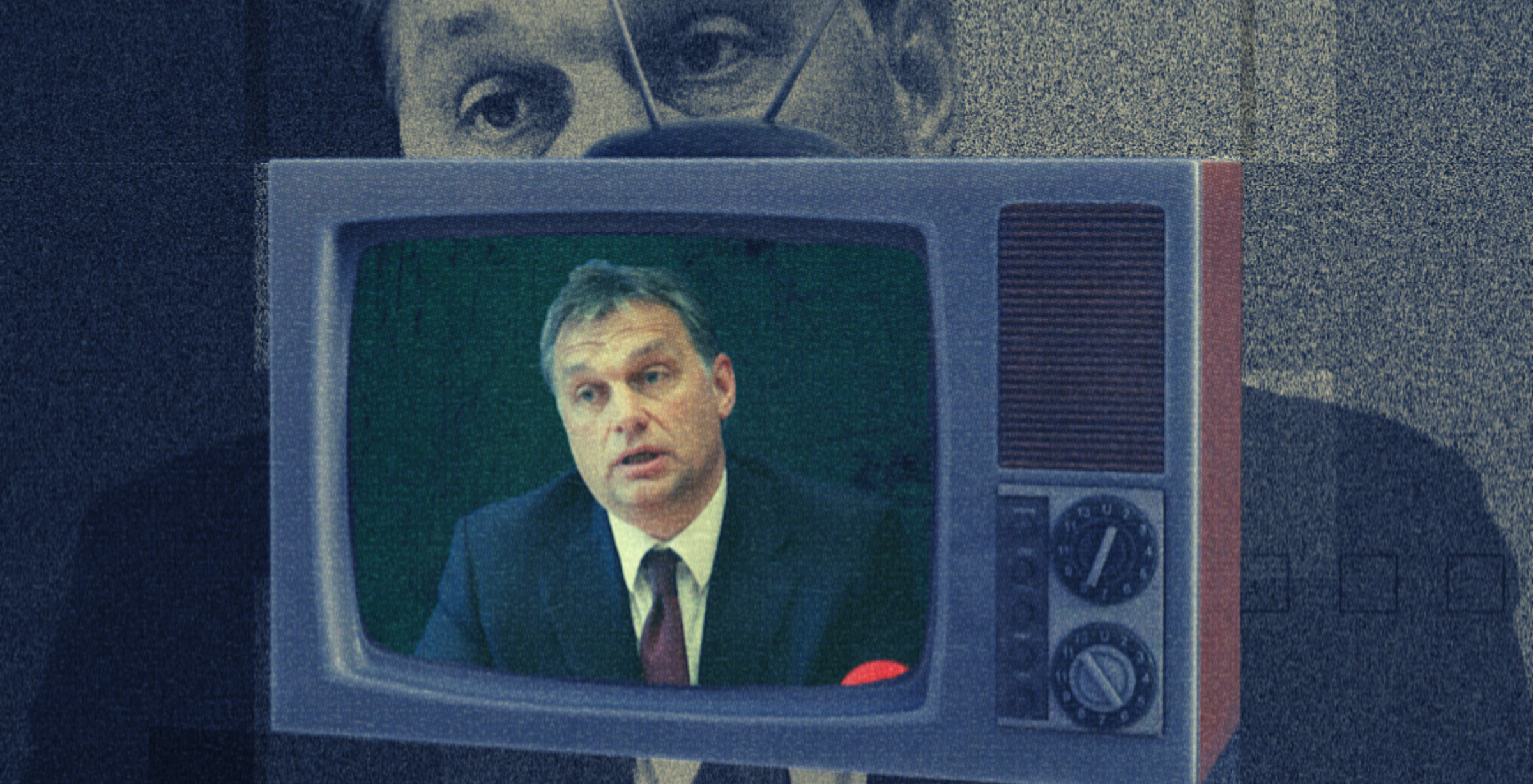 Early one Saturday in October 2016, the staff at one of Hungary’s oldest newspapers started their day off trying to relax. Anxiety had been high for months amid rumors that the nation’s most popular broadsheet publishing since the anti-Soviet uprising in 1956 would be the next victim in Prime Minister Viktor Orban’s aggressive campaign to close or destroy the country’s independent media.

Deputy editor Marton Gergely remembers vividly that he was making French toast for his children when life as he knew it turned upside down. For a business that thrives on scoops and inside sources, no one in the Nepszabadsag newsroom had any idea if — or when — disaster would strike. Around 8:30 a.m. journalists from his newsroom started making panicky calls. They had been locked out of email and the paper’s servers.

Ten minutes later — at 8:40 a.m. — Nepszabadsag’s website froze, its archive was erased and the newspaper effectively died. “Just like Pompeii,” Gergely recalled. “It was out of the blue, it was sudden, and it was brutal.”

Unlike the ancient Roman city ossified under tons of lava and ash, the swift demise of Hungary’s most widely read newspaper and dozens of other independent media in the country was not caused by natural disaster. Their destruction was man made. For the last several years, a cabal of Orban’s childhood friends and political allies seized control or closed publications and broadcasters which didn’t toe the leader’s political line. Sometimes their moves have been transparent. Some — like the closure of Nepszabadsag — have been more opaque. But without a doubt they have been very effective. Today, almost 80% of Hungary’s media is controlled by the state or friends of Orban, according to the Mertek media monitoring group, and media ownership is more concentrated now than at any time since 1990, when the country moved from one-party rule to democracy.

Now, Hungary’s pro-Orban media moguls, flush with cash and strong political connections, are targeting for acquisition news outlets in other parts of Europe, including Macedonia, Slovenia and even the United Kingdom, that Orban hopes to foster his far-right ideology.

A senior commander in this media campaign is the same man who Gergely and other Hungarian journalists say helped engineer Nepszabadsag’s closure and has become Hungary’s biggest media mogul: Lorinc Meszaros, a man who grew up with Orban and whose career path charts a reverse arc of Pompeii.

In a few short years, he has transformed from a small town pipe-fitter reportedly on the verge of bankruptcy to one of Hungary’s wealthiest men. In November the owners of 476 media outlets, who — like Meszaros — are friends of Orban “donated” these assets to a foundation which one of his companies now manages and controls.

The nondescript five-story building in the Buda district of the Hungarian capital which was once Nepszabadsag’s newsroom — a building also owned by one of Meszaros’ companies — is now the headquarters for the foundation known in Hungarian as KESMA. Here, the sprawling enterprise works without any legal or political impediment to consolidate the media landscape both at home and across Europe. The goal: to deliver coverage more supportive of Orban’s far-right ideology and less interest in their business and political practices.

“Orban wants some regional allies,” said Agnes Urban, a researcher from watchdog group Mertek Media Monitor. “Hungary is not enough for him; he has more ambitions.”

Meszaros, Hungary’s most influential media mogul, has summed up his rags-to-riches story as a benevolent mixture of three influences: “God, luck and Viktor Orban.”

In the 1990s, Meszaros had a small gas-fitting company in Felcsut, the village just west of Budapest that most Hungarians know as Orban’s hometown. The two men became friends over a shared love of football and in 2007, Orban named him chairman of football academy in the small town. After Orban’s return to political power in 2010, Meszaros, who was Felcsut mayor until 2018, suddenly saw his business fortunes rise.

By the end of 2018, Meszaros owned or controlled 203 companies and had an estimated wealth of 905 million Euros, according to Forbes and Orange Files, an online site which documents the rise of “illiberal democracy” in Hungary.

In response to news reports stating that his assets had grown faster than the fortunes of Facebook’s founder, Meszaros replied: “Maybe I’m smarter than Mark Zuckerberg.”

Critics of the government, like Gergely and other independent journalists, say Meszaros’ intelligence played little part in his sudden wealth. It was his connections that mattered.

In Hungary the state plays a significant role in the advertising business. Outlets deemed unfriendly to the prime minister have been starved of those advertising funds, while Orban-friendly outlets would be showered with largesse.

Many of the properties under control of Meszaros and later KESMA have profited handsomely from state spending. In 2017, state advertising spending accounted for 83% of ad revenue for media outlets later handed over to KESMA. Also in that year Meszaros’ controlled media companies alone had revenues of 20.41 billion Hungarian forints or 65.7 million Euros.

Several of the media outlets that have been bought up by Orban-friendly businessmen in the past few years had been profitable and financially healthy before they were targeted for takeover by the politically motivated businessmen.

At Nepszabadsag, the paper was still making money when, amid a lot of negative coverage of Orban’s allies, the rumors started about it being closed down, according to Gergely, the former deputy editor. Mediaworks, the company which bought — and closed — the paper in 2016 was headed by an executive who made no secret of his support for the Hungarian leader. That company was later snapped up by one of Meszaros’ subsidiaries.

The perks of belonging to what Gergely, the former deputy editor of Nepszabadsag, calls “the media monster group,” hold allure for many Hungarian journalists. Join the pro-government team and a reporter can raise a family, and maybe even afford to hobnob with pro-Orban businessmen on the other side of the Danube from the Nepszabadsag’s former newsroom.

In the posh Pest district not far from parliament the chichi Japanese restaurant Nobu is one of the expensive new eateries which dot the upscale streets. For those with sophisticated palates, there is yellowtail sashimi with jalapeno and Alaskan black cod de miso on the menu, dishes that most Hungarians have probably never heard of, let alone tasted. The restaurant offers gift cards of up to 50,000 forints (about 155 Euros), about three-quarters of the average weekly national wage.

There is a stomach-curdling irony about the fact that fine foreign cuisine is making inroads into Hungary at a time when Orban and his friends are consolidating power. The media owned by his friendly oligarchs, the presumed targeted customers for these high-end restaurants, rarely cover the benefits of pan-European open borders which including making such high-end restaurants possible.

For Gergely and the dwindling numbers of independent Hungarian journalists, life is not so luxurious. After Nepszabadsag was shut down, he and several former colleagues tried to set up another paper, but failed miserably as they didn’t have the finances or know-how.

He later landed a job at an established alternative weekly media called HVG, where he earns 30% less than he did at the paper and manages six people instead of 60. Still, he says, “I was very lucky and very happy. There weren’t many good jobs.”

In December 2018, Hungary’s waning liberal activists tried blocking KESMA’s operations, citing anti-competition laws. Hungarian courts were blocked from ruling on their challenge when Orban declared the foundation a “national strategic importance in the public interest.” The EU has an investigation underway into whether KESMA violates any free market laws, but the European Commissioner for Competition Margrethe Vestager has signaled that little action should be expected.

Orban’s protection of KESMA has opened the field for Meszaros and his cronies to aggressively hunt for more take-overs beyond Hungary’s borders.

One of the first foreign targets of the pro-Orban oligarchs occurred back in 2017 when two former executives at Hungarian public television opened Macedonian companies intending to invest in local media, according to documents obtained by the Organized Crime and Corruption Reporting Project (OCCRP).

Slovenia was their next beachhead. There, three Hungarian media firms — one of which is was also involved in the Macedonian purchases — spent a year gaining control of NOVA24TV.sl, which boasted a television channel, an online news portal, and a radio station founded by the conservative Slovenian Democratic Party. The Hungarian companies’ boosted their original stake in the company from 45% to nearly 88%, according to the OCCRP.

In April, the Hungarians crossed the English Channel with the launch of London-based online news agency V4NA which publishes current events, sports and light features in Hungarian, English and French, many of which parrot pro-Orban views.

V4NA says it has a 50-strong newsroom in London and in Central Europe, but so far it does not appear to have gained much traction in England’s saturated media environment. The content is behind a paywall, and it’s unclear how many subscribers the site has.

What has recently become more transparent, however, is the identity of V4NA’s owner.

The company was originally registered in London by Hungary’s ambassador to the United Kingdom in December 2018. In April, Arpad Habony, Orban’s main spin doctor, acquired a 40% stake in the company via his London political advisory firm, Danube Business Consulting Ltd. Then, the Porsche-owning son of the central bank governor, acquired a 57% stake from the ambassador via his business called New Wave Media, or NWM.

NWM was one of the assets “donated” to the KESMA foundation last fall.

Back in Budapest, Gergely says he has mixed feelings each time he passes the nondescript building where his longtime newsroom was once located. From the outside, the communist-era edifice exhibits a bland exterior, with nothing more dramatic outside then a limp Hungarian flag. But what’s going on inside is what matters.

Prior to its closure, Nepszabadsag was covering critical stories on Orban allies like the central bank governor and the man dubbed the propaganda minister Antal Rogan, Few Hungarian outlets are doing that kind of reporting anymore. Even neutral coverage of foreign affairs is a dwindling commodity.

KESMA, the Meszaros foundation, is busy churning out pablum, instead.

The contrast is dizzying and depressing, says Gergely. Similar to his feelings about Orban himself.

Thirty years ago, when the Iron Curtain fell, the younger politician represented hope of a fresh start for many young Hungarians, including Gergely. Now, the country is suffering from Orban’s own ideological blinders as well as the sheer banality of the men he has around him.

Gergely believes that many of Hungary’s media takeovers and closures were part of base transactional calculations, a sport that earned oligarchs something akin to a hunting trophy each time a critical news outlet was put out of business.

The fact that journalists like him are on the verge of extinction puts his nation – and other countries in Europe – in jeopardy.

“Hungary has become a model illiberal state. And it feels like one,” Gergely said.