How China threatens prominent Uyghurs — in the US, in China and everywhere

In 1992, the head of the Xinjiang Regional Museum’s archeology department and a well known Uyghur intellectual, Abduqeyum Hoja, had taken a rare trip abroad. He had flown with two Tarim Basin mummies to the University of Tokyo on a mission to date the ancient cadavers — an important scientific quest to advance understanding of the anthropological record in China’s Xinjiang region.

But on a stop in Shanghai to present the University of Tokyo’s findings, scientific authorities revised the age of the mummies. They changed the date so it would be consistent with Han Chinese historical presence in the region. The mummies couldn’t be “older than Chinese history,” remembers the archeologist’s daughter, Gulchehra Hoja. Her father, she recalls, came home to Urumqi, the capital of Xinjiang, shaking with rage.

Eight years later, the museum where Abduqeyum worked was demolished, ostensibly to house its priceless collections in a more modern structure. But Abduqeyum believed the government ordered the building’s destruction in 2000 to help erase the Uyghur cultural record, and his anger flowed again. “So many things in that building went missing, just went away,” Gulchehra said.

And then so did Gulchehra. In July 2001, she had packed a single suitcase to embark on an exciting solo vacation, an itinerary that flew her from Urumqi to Vienna. She could afford a European vacation. Like her father, she had become a well-known figure in Xinjiang. Gulchehra was the host of a popular provincial children’s show, a role she enjoyed, although she had been under pressure to speak more Mandarin, instead of the channel’s primary Uyghur language, and to feature more Han Chinese children.

Vacationing in Austria, she accessed the internet for the first time, connected with Uyghur activists, discovered CNN and Western newspapers. She was astonished at her own lack of awareness of acts of repression against Uyghurs at home. “I felt shame,” she recalls, and abruptly concluded that she would not return home, despite her closeness with an extended family of cousins, aunts and uncles, and a grandfather famous in Xinjiang for his traditional Uyghur musical compositions.

In choosing to suddenly emigrate, Gulchehra, who had studied literature at Xinjiang Normal University, abandoned her television career and her father, with whom she had an especially close relationship. He had cultivated a bond with her, ever since she was a girl who obsessed over dreams of becoming a dancer and he obsessed over his dream that she should not. “My father taught me to love books. His knowledge is insane,” she says.

Gulchehra had experienced the dawning of China’s decades-long crackdown on its Uyghur population, which after 2016 saw more than a million people sent to concentration camps and was labeled a genocide on the final day of the Trump administration. But human rights abuses at that scale were still in the future when in 2000, as the host of a children’s television show, the government sent Gulchehra on a tour of big Chinese cities — Shanbong, Beijing, Shanghai — to interview Uyghur children who had been sent to live in boarding schools.

She describes what she witnessed as a “brainwashing:” children forced to eat non-halal food, speak Mandarin, and shed Uyghur cultural habits. Parents were allowed to visit once a month.

By October 2001, Gulchehra had obtained a working visa and could move to the U.S. She spoke almost no English but, with a background in broadcasting, had found a job as a journalist at the Uyghur-language service of Radio Free Asia in Washington D.C..

Gulchehra rose in prominence as a Uyghur-language journalist and developed a large following. She has closely chronicled events in Xinjiang from Washington, conducting important interviews with camp survivors. China’s government has watched as she has been honored for her work, receiving the Magnitsky Human Rights Award and the Courage in Journalism Award

At first, China’s reprisals were aimed at her father. The regional government in Xinjiang severed Abduqeyum’s ties to the museum and any access to scholarship, and his books on the Taklamakan desert’s Buddhist-era societies were banned.

A gregarious man who enjoyed public speaking and live music, Abduqeyum began to spend more and more time on his balcony, where he grew hundreds of blooming flowers in pots. Gulchehra said that her brother often visited their mother and father, and so did old classmates, who would help Gulchehra’s parents remember their long-absent daughter. “They would come to celebrate my birthday together, before the camps started of course, before most of them had been arrested,” she said.

For two decades, Gulchehra kept in touch with her family by phone. Although, said Dana, Gulchehra’s 16-year-old daughter, “If you say certain trigger words, the phone automatically hangs up. China controls that. So, it’s always stressful.”

In September 2017, when evidence of mass internment camps began streaming out of Xinjiang, Gulchehra learned that her brother had been picked up by the police. Less than a year later, 24 of her relatives were also arrested. Her father was, by then, partially paralyzed from a stroke and could no longer speak on the phone.

Then, in April, the Chinese government released a video about Gulchehra, a U.S. citizen living in Northern Virginia, and her 81-year-old father. It purports that they pose a violent threat to Chinese sovereignty and have been put on a roster called the Shanghai List.

According to the Chinese government, they are now terrorists.

“I was expecting a more serious reaction from the American government, for the State Department to give a statement, to condemn China and say, stop harassing a U.S. journalist,” she told me. “I’m using my voice but it’s not enough. This is mentally torture, separation from my parents for 20 years.”

The Chinese government has taken aggressive measures against citizens and former citizens living in foreign countries who it perceives to be a threat. A new report by the Uyghur Human Rights Project and the Oxus Society for Central Asian Affairs includes the first case-by-case map of China’s transnational repression against Uyghurs. It also reveals that, between 1997 and December 2016, China was involved in the detention or deportation back to China of over 851 Uyghurs across 23 countries.

Since 2017, China’s actions against overseas Uyghurs have “expanded dramatically as part of the broader security sweep.” Since 2017, the report finds, at least 695 Uyghurs have been detained or deported to China from 15 separate countries.

It also documents that since 1997, when the first cases of rendition of Uyghurs to China were recorded in Pakistan, China’s “transnational repression has expanded to include a full gamut of activities from espionage, cyberattacks, and physical assaults, to the issuance of Red Notices via Interpol.”

The threat of retaliation looms constantly over Gulchehra. “My children are worried when I go to the supermarket, what might happen to me,” she said.

The modern crackdown in Xinjiang began when China seized on the Bush administration’s post-9/11 call for a globe-spanning assault on terrorism, in order to first erode and then to strip away the civil rights of the Uyghurs in Xinjiang.

China’s totalitarian apparatus of surveillance and control was installed under the cover of anti-terrorism measures. In the 2000s, punitive curfews were imposed after frequent police raids rounded up hundreds of Uyghurs in search of explosives and firearms. Communal violence — sparked by an influx of Han Chinese from outside Xinjiang — and riots in the streets were also cited to justify further crackdowns in the name of anti-terrorism. Uyghurs demonstrating against government policies were characterized by Chinese media as violent separatists.

I traveled throughout Xinjiang on a reporting trip in the fall of 2008, at a time when large numbers of Han Chinese were being induced to relocate to the underdeveloped region, even as state media stoked fear of Uyghurs targeting them for muggings and robberies. Government goons dressed in black carrying a steampunk-looking camera trailed me in a black sedan, filming while I ate in restaurants. It felt like everybody was being watched. I emailed an editor that Xinjiang had “a patina of creepiness.”

Mosques had become avatars of religion, controlled by government minders. Mandarin-language posters peered over the walls of Uyghur bookstores. I interviewed Uyghurs who spoke of pressure to “become Chinese.” The attempt at erasure of their cultural identity I saw in 2008 foreshadowed the “re-education” camps a decade later. “They are trying to eliminate us by making us Chinese,” said Abdul, a 25-year-old English-speaking Uyghur man, who I met in Hotan, a city in southerwestern Xinjiang.

Back in Northern Virginia, Gulchehra said she has been warned not to travel abroad. “My freedom of movement is controlled by the Chinese government. It’s ridiculous.”

“I feel like I don’t have much time, my father is 81 years old. The Chinese government wants to silence me. I want the American government to protect me. If I cannot go there, please use tools to bring my parents here.”

The investigation is supported by the JFJ Investigative Grant Program. 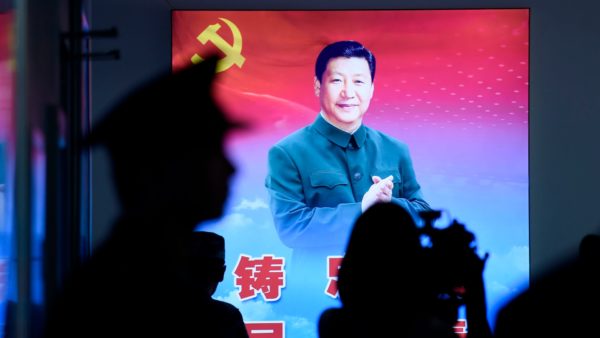