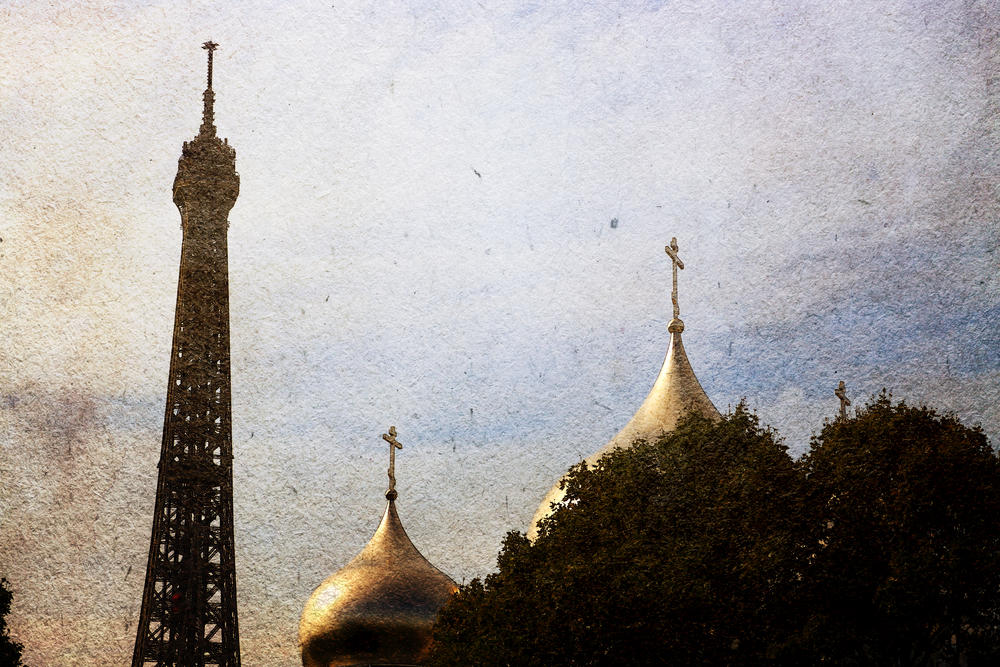 Where Putin Wants You to Pray in Paris

The Kremlin has a plan to win back French hearts, minds and souls: ‘St Vladimir’s’ on the Seine.

Looking up at the five huge golden domes obscuring the view to the Eiffel Tower, a pair of French tourists visiting the capital for the weekend are puzzled, even shocked.

“Wow, a mosque…here!” Marie-Christine Paquot says to her 60-year-old husband Lionel, echoing a common reaction to the site. He quickly corrects her: “It’s an Orthodox church, you can see the crosses.”

The couple from the French Alps have just discovered the new monument to Russia’s emerging role in Europe. The controversial Sainte-Trinité Russian Orthodox cathedral, set to be consecrated by the Russian Patriarch Kirill in early December, is the result of determined diplomacy by the Kremlin and lobbying of French officials, including Francois Fillon, the new favorite to win France’s 2017 presidential election.

Having established its function, the Paquots discuss the building’s merits. Marie-Christine quite likes it. Lionel is bothered. “It’s very strange to see domes in front of the Eiffel Tower,” he says.

Located on prime real estate, the Cathedral conveys modern restraint at street-level and is topped off with what one local office worker described as “imperial bling-bling.” The main dome sits 120 feet above the pavement and is encircled by four others. It took 90,000 pieces of gold leaf to cover them.

The $120 million cathedral was financed by the Russian state and backed by President Vladimir Putin. The structure was completed as his country’s relations with France and its NATO allies nosedived over the deployment of Russian firepower in Syria and Ukraine.

While those interventions have come to define Putin’s presidency, the riverside “St Vladimir’s,” as the cathedral has been nicknamed, represents another side of his foreign policy. Also divisive, it is a high water mark in his use of faith and power abroad.

The Orthodox Christian community in France has been expanding. It is now thought to number 350,000-500,000, swelled by recent immigrants from the Balkans and the Middle East.

Like elsewhere, worshippers look to one of several branches of the church. In France, the politicized Moscow patriarchate used to command the biggest following, but over the last century it has lost out to the more neutral clergy in Constantinople, modern-day Istanbul.

Under Putin, attempts to claw back this loss of prestige and influence have driven a wedge through the community.

“There are tensions which there shouldn’t be. It’s regrettable,” says Alexandre Troubetzkoi, executive president of the Paris-based Association for Franco-Russian Dialogue, which has links to the Kremlin.

This ostentatious monument to Eastern Christianity comes at a time when staunchly secular France is soul-searching about the role of religion in public life.

The opening of the cathedral was also overshadowed by larger, political tensions between France and Russia. Putin was due to visit Paris in October to inaugurate the complex, but cancelled his trip after French President François Hollande insisted that he would only meet the Russian leader to discuss the conflict in Syria.

This ostentatious monument to Eastern Christianity also comes at a time when staunchly secular France is soul-searching about the role of religion in public life. After attacks by Islamic-State-inspired extremists in Paris and Nice, a top government advisor recently implored Muslims to live “discreetly.”

Having watched the edifice grow on a corner of “picture-postcard Paris,” local office worker Paul Le Cuziat is struck by the timing.

“The question I have, and it would amuse me to know the answer, is how they [French officials] would have reacted if instead of the crosses above the cupolas, there were crescents,” he says with a smile.

The Sainte-Trinité cathedral has been a priority for Putin for nearly a decade, pursued through diplomacy and lobbying at the highest levels of the French state. One of its biggest backers, a top Putin aide, almost gave up hope when former Paris mayor Bertrand Delanoe vetoed the initial design in 2012.

“It wasn’t easy. At one point, we felt like we were really close to abandoning everything,” said Vladimir Kozhin as he unveiled a second and final design before the press in 2014.

The project began in earnest in 2010, when the Russian state trumped offers from Saudi Arabia and Canada and paid the French $78 million for the land in the heart of Paris.

The Sainte-Trinité Cathedral has been a priority for Putin for nearly a decade, pursued through diplomacy and lobbying at the highest levels of the French state.

French security services objected because the land on which the Russians were to build a cultural center, offices and a school in addition to the cathedral was located near sensitive sites and there were reportedly concerns about the location’s spying potential: the French foreign ministry is a short walk away on the Quai d’Orsay, as are several foreign embassies and a nearby palace that contains private apartments used by aides to the French president, including one where former president François Mitterrand spent time with his mistress.

But security concerns were brushed aside, largely because of crucial interventions by Putin and his associates.

“It’s thanks to the Russian state because it provided the financing,” says Troubetzkoi. “The state cooperates enormously with the church.”

On a visit to Moscow in 2010, then Prime Minister François Fillon remarked on Putin’s single-minded pursuit of the cathedral. “He won’t let go,” he told culture minister Frederic Mitterrand, according to Mitterrand’s memoirs.

Fillon, a devout Christian like Putin, was involved with the project and his friendly ties to the Kremlin leader are now under scrutiny as he emerges as one of the favorites for next year’s presidential election. The prime minister publicly opposed Western sanctions imposed on Moscow over its invasion of Ukraine. His political ascent is excellent news for Putin who has watched the Brexit vote in Britain and the US election go his way in 2016.

The Cathedral is one of the most symbolic foreign policy achievements of Putin’s Russia. The $120 million bill for the religious complex is the sort investment in religion more common to proselytizing Gulf monarchies, not for a country that separates church from state in its constitution.

But Vladimir Putin has made Russian Orthodoxy an increasingly important pillar of his presidency, using the Church to legitimize the Kremlin’s conservative social agenda on issues such as gay rights and to back what Russia calls its “responsible use of force” in Syria.

Could a visible and powerful symbol of Russian culture and influence in the heart of Europe create a rallying point for the Russian diaspora and the growing Orthodox community in France, energizing a network of people seen as open to Putin’s illiberal agenda?

If this is a goal of “St Vladimir’s,” it seems to face some resistance.

Thousands of Russians lived in and traveled regularly to France during the imperial era, and grand Orthodox churches and cathedrals were raised to serve their needs. Several hundred yards up the Seine from Sainte-Trinité lies the equally eye-catching Alexandre III Bridge, built to honor the Tsar and French-Russian friendship at the turn of the 20th century.

The Revolution of 1917 swelled the Russian community, as tens of thousands of aristocrats, political exiles and migrants fled their homeland for the security of France.

When Soviet leadership began repressing the Russian patriarchate, the devout diaspora in France slipped out of Moscow’s orbit. Their churches in France aligned themselves instead with the branch of Orthodoxy based in Constantinople.

This was the case with the existing Russian Orthodox cathedral in the capital, Saint Alexandre Nevsky, built in 1861 with private donations. It remains aligned with Patriarch Bartholomew I in modern-day Istanbul, and has refused to return to Moscow’s orbit.

Its defection meant the only Moscow-oriented church in the capital was housed in a cramped flat-roofed building, reportedly a former garage, in the unfashionable 15th arrondissement.

On the southern Riviera in Nice, a center for émigrés and a magnet for modern-day expats from Russia, Moscow fought parishioners and the rector, Jean Gueit, through the courts to take possession of the Saint-Nicolas Orthodox Cathedral, which aligned itself to Constantinople.

France’s highest court finally ruled in 2011 that the Cathedral belonged to the Russian state. Moscow church and embassy officials had to smash the lock off the door to gain entrance.

“All these pre-revolution churches represent a symbol of Russia and its grand imperial mission that they want to recover by any means possible,” says Gueit, now a priest at a much smaller church in Marseille.

He says he and most of his congregation are horrified by the new “nationalist statement” in Paris.

“We represent Orthodoxy and nothing else, not the grandeur of Russia,” he says. But he concedes that newly arrived Russians are more susceptible to the message from Moscow.

“We are Christians and we don’t want religion to be mixed with international politics,” said a church official in Biarritz who asked not to be named for fear of harassment.

An Orthodox church in the southwestern town of Biarritz was also the subject of a courtroom battle. On December 26, 2004, parishioners convened and voted for San Sebastian Church to switch its allegiance from Constantinople to Moscow—festive news announced by the Russian state media. However, church officials opposed to the switch argued that the list of voters had been falsified and a French judge ruled in their favor. Today the church remains allied to Constantinople and parishioners there look back on the tussle as a “putsch.”

“We are Christians and we don’t want religion to be mixed with international politics,” said a church official in Biarritz who asked not to be named for fear of harassment. He said he was convinced that the dark arts of the Russian state had been deployed in the failed bid to seize control.

“Do we really need a second cathedral in Paris?” he adds. “That’s the question we are asking ourselves. To what end, for what reason?”