Russia has accused the BBC of promoting terrorism by publishing quotes from ISIS leader Abu Bakral al-Baghdadi and has threatened legal actions against the British broadcaster under the country’s 2016 anti-extremism laws, which have been criticized for its potential to stifle political speech.

The BBC has recently beefed up its Russian-language content, adding new reporters and conducting extensive investigations into Russian politics and digging into sensitive topics such as the identities of the Salisbury suspects of the novichok poisoning, according to The Guardian, which notes that Roskomnadzor, the Kremlin’s powerful media watchdog, announced in December that it had launched its review of BBC content hours after its British media regulatory counterpart, called Ofcom, accused the Kremlin-backed channel RT of violating the UK’s rules on impartiality in reporting on the Salisbury incident.

Moscow called any actions against the BBC a “mirror measure” reflecting Britain’s “constant propaganda against RT,” according to the AFP.

“At present, materials have been discovered that broadcast the ideological attitudes of international terrorist organizations,” Roskomnadzor said. A spokesperson at the BBC denied the allegation, responding that the “BBC fully complies with the legislation and regulations of every country where it operates, including Russia.”

Britain has become an increasingly prominent target of Russian government and media attacks amid continuing tensions between the two states over the attempted assassination of former Russian spy Sergei Skripal last year. The retaliation against the BBC highlights how a tit-for-tat media-centered row is escalating between London and Moscow, observed The Guardian, a deterioration in relations that involves not only media outlets, but embassies too. Moscow also accuses the British military’s 77th Brigade information warfare unit of supporting Ukraine’s special forces’ psychological operations against Russia.

Russia’s anti-extremism laws have also targeted Muslims living in Russia, clamped down on political dissent, have been used to censor social media posts, and have been even marshalled against Jehovah’s Witnesses, a religious denomination that has been met with opposition from the Russian Orthodox Church. Human Rights Watch warned when the legislation was passed that in curbing free speech the laws serve to shut down public debate and deny a voice to anyone dissatisfied with the ongoing economic crisis or simply critical of Russia’s foreign policy,

The Kremlin’s broad unease with political speech sparked a round of ridicule last month when President Vladimir Putin suggested the Russian government needs to “lead and direct” Russian rappers who dip into political commentary. Homegrown Russian-language rap is a very popular musical genre inside Russia. 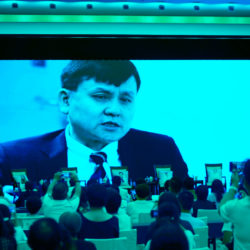