Welcome to the Infodemic and, if you just joined us, thank you for signing up! We are tracking how disinformation surrounding the coronavirus crisis is reshaping our world. Here are the narratives, both real and fake, that have grabbed our team’s attention this week and deserve yours.

In Brazil, a Senate probe into President Jair Bolsonaro’s handling of the coronavirus pandemic is heating up. On Tuesday, the country’s former health minister told investigators that the president ignored his warnings that tens of thousands of Brazilians could die and that the health system could collapse if the government refused to enforce Covid-19 restrictions. That didn’t stop thousands of Bolsonaro supporters flocking to cities across the country amid a surge in Covid-19 cases. The virus is wreaking havoc outside of Brazil, too. Argentina’s health system is on the brink of collapse, deaths in Venezuela have shot up 86% since January, while cases are soaring in Uruguay, Colombia and beyond. Scientists are forecasting a grim picture for the next few weeks in Latin America. Home to only 8% of the world’s population, last week the region accounted for 35% of global Covid-19 deaths.

Covid-19 paranoia has reached new levels in North Korea. There are already shoot-to-kill orders along the hermit country’s border and, last week, the government ordered citizens to stay inside, fearing that a dust storm would blow in the virus from China. The state-backed newspaper Roding Sinmun has now warned citizens to be extra-vigilant against propaganda leaflets floating over the border from the south. “We must consider them a possible route of transmission of the malicious virus,” it said. Covax is being painfully slow at delivering vaccines to North Korea, with no proper timeline on when the country’s delayed 1.7m AstraZeneca doses might arrive. It could be anytime between July and December, the vaccine giant Gavi told North Korea News.

Like India, Iran is battling its worst wave of infections. This week, officials unveiled a new “anti-corona spray,” used to “convert ordinary masks into masks that can kill coronavirus” according to the Tehran Times. The spray was launched in a special ceremony at a Tehran hospital, but already Iranians online are nicknaming it the “Mosta’an” spray, in memory of the widely ridiculed quack “Covid scanners” Islamic Revolutionary Guard Corps publicized last year.

This week, a distasteful post was made on the official Weibo account of the Chinese Communist Party’s Central Political and Legal Affairs Commission. It mocked the devastating situation in India with side-by-side pictures of a Chinese rocket being launched into space and Indians cremating their dead. The headline read: “How China lights fires vs how India lights fires.” The post, which has since been deleted, outraged many Chinese citizens as much as it appalled us. “This made me feel cold,” wrote one user on Weibo. “The lack of humanity!” said another.

When it comes to PPE and vaccine diplomacy, Russia and China have outmaneuvered the West at every step throughout the pandemic. A recent story from the Czech Republic shows just how much influence the immunizations have on geopolitics.

A NEW FRONTIER FOR VACCINE DIPLOMACY by Katia Patin

Just how far are politicians willing to go to get vaccines? That’s what people in the Czech Republic have been asking themselves this week, after journalists published a story on Tuesday that accused the deputy prime minister of planning a trip to Moscow in order to trade political favors for one million Sputnik V shots.

Jan Hamacek, who was acting foreign minister at the time, met in private with Czech national security officials and diplomats on April 15. His pitch: let’s offer to patch up diplomatic relations with Moscow in exchange for vaccines.

The next morning, Hamacek announced publicly that the proposed visit to Russia was simply to negotiate access to Sputnik V. However, sources who attended the meeting told reporters from the online news outlet Seznam Zpravy that Hamacek had a somewhat different agenda in mind and that he even hoped to broker a meeting between President Vladimir Putin and President Joe Biden in Prague.

Context: The leak comes at an all-time low for Russian-Czech relations. Just two weeks ago, the country expelled 60 Russian diplomats; Moscow responded by removing 20 Czech envoys. The expulsions came after Czech investigators made a major breakthrough in their probe into an explosion at a weapons warehouse in the village of Vrbetice in 2014. Russian spies, they said, were behind the arms depot blast, which killed two people, and there had to be diplomatic consequences.

In terms of the coronavirus, the culmination of the seven-year-long inquiry couldn’t have come at a worse time. The Czech Republic is struggling to vaccinate its 10 million people and has wavered on buying Russian vaccines. Prime Minister Andrej Babis has just appointed a new health minister — the country’s fourth since the pandemic began. With Europe and the United States failing to provide enough help, pressure has been mounting on the government to put geopolitics aside and secure Chinese or Russian shots.

The consequences: The Moscow trip isn’t happening, after all. As the fallout over Vrbetice intensified, Hamacek scrapped the plan entirely. However, he is still facing severe criticism.

“He did something absolutely unbelievable here, a total fiasco, a shame, a manifestation of total incompetence,” said former Czech Ambassador to Russia Petr Kolar in an interview with Seznam Zpravy. “I am ashamed that we have such a case at all and we have to confuse our allies.”

Hamacek has accused the Seznam Zpravy journalists of fabricating the story, tweeting that “the article is based on speculation and lies.”

Meanwhile, in Russia, the story has generated headlines that state that the entire incident is further evidence of U.S. control over its allies in Europe.

Many thanks to Coda’s Isobel Cockerell, Erica Hellerstein, Mariia Pankova and Oleksandr Ignatenko for contributing to this week’s Infodemic. 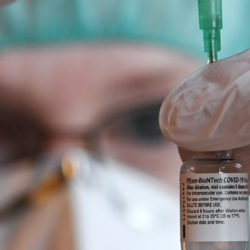