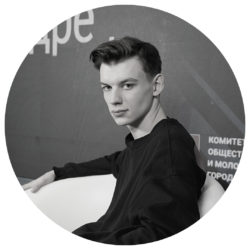 PROSECUTING PROPAGANDISTS IN THE HAGUE

Every morning when I open Telegram, my feed is full of Russian propaganda. Unfortunately, when you’re a journalist, especially a Russian journalist in exile, you have to keep up with the talking points of the state-sponsored propagandists.

Chief among them is Olga Skabeeva, who has almost 200,000 subscribers on her Telegram channel. In one post, just a few days ago, she wrote, and I’m translating literally, “in Ukraine, the sound of generators is the most common after the sound of ‘Geraniums.’” In Russia, the Iranian-made Shahed-136 kamikaze drones that are being deployed in battle are also called “Geranium-2” and are increasingly being used to cripple Ukraine’s civilian infrastructure.

Another example of the crass cheerleading I see is the channel operated by Anton Krasovsky, an openly gay man who sees no contradiction in working for the homophobic Russian government. Last month, Krasovsky called for the burning and drowning of Ukrainian children on Russia Today. He was suspended but I wouldn’t be surprised if he reappears on air sooner rather than later.

Faced with this sort of content on a daily basis, it is fair to ask: how can we hold these propagandists accountable when Putin’s regime ends?

There are historical examples. The most famous is the conviction and execution of Julius Streicher, the publisher of “Der Stürmer” newspaper. In the Nuremberg trials, Streicher’s incitement to hatred and violence was found to have been a crime against humanity.

A more recent example of such incitement was RTLM from Rwanda, alleged to have been a propaganda mouthpiece for the Hutu, which broadcast such virulent hate speech and incitement that scholars argue the station played a pivotal role in the 1994 genocide against the Tutsi. The owner of the radio station, Félicien Kabuga, was accused of crimes against humanity. His trial began in the Hague at the end of September.

Anna Neistat, a lawyer at the Clooney Foundation of Justice, told me that the first criminal offense under which courts can prosecute Russian propagandists is incitement to genocide. “It is interesting that we don’t need to prove the act of genocide for this,” she said. “Even if various judges and prosecutors conclude that there is no genocide in Ukraine, the propagandists can still be found guilty of inciting genocide.”

Another way might be to prosecute journalists for writing and publishing war propaganda. Some criminal codes in Eastern European countries include such provisions — ironically, a residue from Soviet times.

Criminal prosecution of propagandists primarily applies to those with a large audience and influence over the mood of the army and the people of Russia. Charges like these are unlikely to affect editors and support staff who have little option but to carry out the tasks assigned to them on state-backed channels. The knowledge that they are not in immediate danger of prosecution, though, might motivate them to testify.

As Neistat pointed out: “Whoever starts talking first has a better chance of ending up as a witness rather than in the dock.”

The original conversation with Anna Neistat ran as part of Coda’s Russian language podcast by Ivan Makridin. Make sure to check it out.

Elon Musk looked to cement his position as the crown prince of disinformation this week with the summary dismissal of Twitter’s advisory Trust and Safety Council. The council, made up of several dozen independent organizations, many of them civil and human rights watchdogs, was informed by email before it was supposed to meet on Monday. “Our work to make Twitter a safe, informative place will be moving faster and more aggressively than ever before,” the council members were told, but that the council itself “is not the best structure to do this.” Safeguards against hateful and harmful speech have been removed with no alternative structures, except bluster, put in place. The result has been a measurable rise in violent speech. Musk himself is a participant in that violence. As Jodie Ginsberg, the president of the Committee to Protect Journalists, one of the organizations on the now disbanded Trust and Safety Council, said: “Safety online can mean survival offline.”

Reporters Without Borders (RSF) has argued with success in a French court that regulators should not be allowed to plead helplessness when faced with platforms that knowingly purvey disinformation. The French administrative court said that it was legally dubious for regulators to claim that they could not stop a satellite service from carrying Russian channels that spread state propaganda. “This decision is a victory,” said RSF secretary-general Christophe Deloire, “for the fight against the Kremlin’s war propaganda.” Just last week, the RSF described the Latvian government’s decision to ban the independent Russian channel Dozhd as “shameful” and “inexplicable.” It’s not contradictory though to call the banning of a channel “disturbing” one week and then call for the banning of channels the next week — it’s about the difference between reporting and intent and deliberate disinformation.

As for deliberate disinformation: Vladimir Putin appears to have passed on an opportunity to present Russia’s worldview in his annual December press conference. Perhaps even Putin feels that now that criticism of the war in Ukraine is punishable with a jail term and that there is no independent media left in Moscow, a press conference would be a farce too far. It’s also likely that Putin doesn’t want to expose himself to uncomfortable questions about a war that is going slowly but inexorably wrong. Instead, as you will see below, it is being left to Putin’s cheerleaders on Telegram to spread Russian disinformation.