The English West Country has long been replete with ancient legends and New Age beliefs. Now, it is waiting for the Great Awakening

In October, Rachel Bate and her three roommates made the five-hour drive from London to the county of Cornwall, in the southwest of England. The U.K.’s coronavirus restrictions were on a brief hiatus, and the friends needed a break. They wanted a “spooky, quirky” trip, and believed that they had found the perfect destination.

Camelot Castle stands atop black cliffs at the edge of the ancient village of Tintagel. A stone behemoth with battlements, mock-Gothic turrets and sweeping views of the sea. Built in 1899 for Victorian holidaymakers, it looks over the ruins of an older castle, where, according to legend, King Arthur and the knights of the round table once lived.

The sun was setting when 35-year-old Bate and her friends reached the hotel driveway. “It was a very windy evening, quite atmospheric,” she said. They walked into the lobby, and an unexpected figure peered out through the gloom. Above the reception desk was a huge photograph of U.S President Donald Trump, standing with his wife Melania and the hotel’s owner, John Mappin.

“I was like, ‘I’m so glad I’m wearing a mask, because it’s covering how horrified I am,’” Bate told me.

She and her friends went to their rooms and began to scour the internet for information. They discovered that the hotel is a spiritual home for the U.K.’s QAnon movement. A vast global conspiracy theory, based around anonymous message board postings or “drops” by a shadowy figure known only as Q, it states that the world is run by a secret cabal of Satanist pedophiles. The theory came into being at the outset of Trump’s presidency and has since gained millions of followers across the world.

“The more we dug, the more disturbing it all became,” said Bate. She and her companions spent the night in the hotel, but left first thing the following morning. “Since then we’ve gone into a proper wormhole. Looking at all of Mappin’s YouTube. It’s just neverending craziness.”

Mappin, 55, is one of the U.K.’s best-known proponents of QAnon theories. When I heard about his castle, I decided that I had to see for myself, and took the train down to Cornwall. On the day when we met, he was dressed in a blue jacket with a purple pocket handkerchief. He speaks with a British boarding school accent. Conversation with Mappin is dizzying. He moves swiftly from his belief in magic to the notion that a mathematical algorithm can predict the future, and a feeling that spiritual forces are wrestling for power over the world’s population.

“I’m not the slightest bit eccentric. I’m interested in the truth,” said Mappin, who first came across QAnon when it first crossed over from the 4chan messageboard to Twitter in late 2017. “I’m always interested in trends, political trends. And, you know, if you start noticing that something is being talked up, then it’s sort of interesting, so it caught my attention.”

During a walk along the cliffs near Camelot Castle, he added that “blackmail is used to control politicians. Pedophilia, Satanic ritual and things like this are part of the arsenal of those that wish to blackmail.”

The number of British QAnon believers has ballooned over the past year. According to a recent poll by the anti-racist group Hope not Hate, one in four U.K. residents believe in Q-related theories.

Last New Year’s Eve, Mappin raised a flag bearing a large Q over the hotel’s battlements. “I knew that certain things were going to occur in the next 12 months,” he said. “Q was going to enter the mainstream narrative.”

The stunt was widely ridiculed in the media and online, but Mappin reckons that a growing proportion of his guests are now QAnon followers. “I’ve got farmers in the village of Tintagel, coming in here for cups of tea in the afternoon. They’re more researched on Q than I am,” he said.

Like most QAnoners, Mappin is convinced that the world is locked in spiritual conflict, and that Satanic forces are influencing political decisions. “There is a dark side to life that is very, very, very, very dark,” he said. “How dark? A lot darker than I even want to contemplate. But I’m not so naive as to think that it doesn’t exist.”

QAnon offers its followers a framework to understand the world and a feeling of belonging to something important. “What a conspiracy theory does is it brings order to chaos,” said Mike Rothschild, who is writing a book about QAnon. “It’s a community. It gives you these puzzles to solve and riddles to decode, and it makes you feel like you are a soldier fighting on the front lines of a war between good and evil.”

Mappin met Trump at a fundraising event in Washington in 2017. He believes that he was the third British person to be granted an audience with him, preceded only by then-Prime Minister Theresa May and leading Brexiteer Nigel Farage.

“He has this incredibly positive spiritual energy,” Mappin said. “You absolutely know you’re in the presence of spiritual greatness.”

Mappin describes himself as one of Trump’s online allies. “I’m not just a digital soldier. I would say I was a freedom fighter,” he said. “And I would use all methods in fighting for freedom — any form of communication that helps move the world towards peace, towards understanding, towards freedom — from telepathy on down.”

QAnon is not Mappin’s first foray into fringe beliefs. Aged 25, he went to Los Angeles, where he studied Scientology for six years. He then returned to London, where he met his wife Irina.

In 1999, during a visit to Tintagel, he spotted the castle from the beach and made an offer to the owner to buy it. Today, its lobby is filled with photographs of celebrities he has met — many of them Scientologists — including the actors Tom Cruise and John Travolta. Upon arrival, each guest finds poetry written by Mappin left on their pillow, and brochures filled with his ideas fanned out in each bedroom.

Apart from the hotel, Mappin has made QAnon central to other areas of his public life. Along with his wife, he hosts a daily YouTube show, Camelot TV Network. The channel has 20,000 subscribers and hosts a range of speakers, including Kate Sherimani, the British anti-5G conspiracy theorist and Shiva Ayyadurai, an Indian American scientist who claims that Dr. Anthony Fauci is a deep-state plant.

Mappin says that he predicted Trump’s win in 2016 by using a special algorithm to analyze footage of the future president descending the escalator in Trump Tower. He believes there is a mathematical order to the world. “I don’t see any coincidences,” he said. “There comes a point where there are just too many coincidences.”

A hundred miles away lies Glastonbury, an ancient town in the county of Somerset, famed for its annual music festival. There, spiritualism and QAnon sit side by side. Like Tintagel, its history is rich in Arthurian legend.

The town lies in the shadow of Glastonbury Tor, a steep hill that has acted as a spiritual magnet for centuries. Some say that it was once the mystical Isle of Avalon, where King Arthur is buried. Many pagans and New Age thinkers believe that it is the point where several ley lines — alignments between ancient sites, imbued with metaphysical energy — converge. There, QAnon has also found fertile ground.

Followers of Q often believe that codes, patterns and signals – be they in Q’s anonymous postings or in Trump’s tweets – point to the imminent arrival of a transformative event where the deep state is marched off to the gallows. They call it “The Storm.” This interpretation of allegedly hidden signs is appealing to those with an interest in New Age spirituality and its accompanying symbolism. As a result, Glastonbury’s mysticism has become interwoven with QAnon.

The town’s high street is lined with shops selling crystals, books about mysticism and witchcraft, and a 15th-century inn. Outside the Church of St John the Baptist, a group of New Age street preachers engage passersby with conspiracy theories.

“A real journalist should know that 9/11 is a scam. It was the very same scam that was orchestrated by the same people that are now doing the coronavirus scam,” one told me.

In March, the town’s council published a report calling for a government inquiry on the effects of 5G. The study was reportedly hijacked by anti-5G conspiracy theorists and spiritual healers.

In one cafe, I met Shannon, a 62-year-old woman, who asked me not to use her full name. After travelling and living in Australia, Indonesia and China, she settled in Glastonbury in the mid-2000s.

She explained she can only discuss QAnon with other people in the town, and that her friends and family who live outside Glastonbury balk at her ideas. “If I said something totally off the wall, someone here would say, ‘Oh, that’s an interesting thought,’” she said. “You don’t get hung, drawn and quartered for having an opinion that’s off the mainstream. I can’t talk about these things with my daughter, she won’t listen.”

Using images and screenshots on her iPad, Shannon then briefed me on a series of her ideas. She told me that one night recently, she watched the moon rising above the Tor and moving in the wrong direction. She believes that Prince Charles and Boris Johnson may have been impersonated by body doubles. That the sun has recently changed color. As for many others, QAnon is just one of a multitude of fringe ideas that compete for her attention.

“It’s a curiosity. You know – ‘Oh, look at that, there’s been a Q drop,’” she said. “You have to be initiated into understanding how they work.”

Hope not Hate researcher David Lawrence explained that QAnon has become popular with followers of New Age and Spiritualist lifestyles. “The orthodox version of QAnon is inflected with Christianity, but as it has broadened, the New Age influence has become more pronounced,” he told me.

Since Trump’s 2020 election loss, the QAnon movement has found itself at a crossroads. Some followers have lost faith, but, as Joe Biden’s presidency draws closer, others have doubled down on claims of election fraud and the takeover of a deep state.

“This movement is now much too powerful and much too big just to vanish,” said Rothschild.

Mappin, meanwhile, remains firm in his conviction and says that he has recently gained a large number of new Twitter followers. “There are a bunch of people who are awake,” he said. “Once people have woken up and seen through the veil of bullshit they are not going to unsee what they’ve seen.”

With the UK now once again under strict coronavirus restrictions, Camelot Castle hotel has closed its doors to the public. The hotel’s rooms lie empty, looking out over the steely January sea. According to Mappin and his fellow Q adherents, The Storm is just over the horizon. 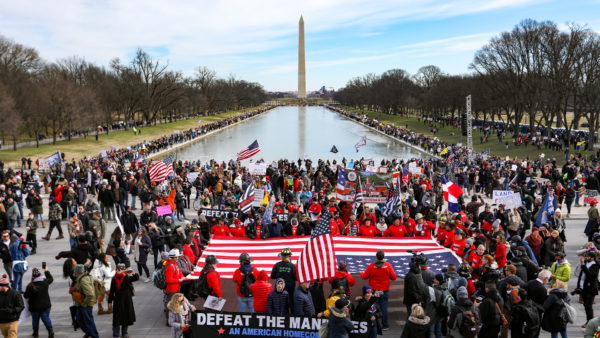