Inside the China Cables: Video surveillance, confessions and ‘de-extremification’ in Xinjiang 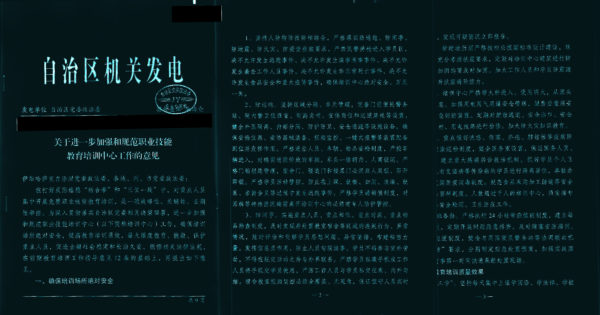 China is leaking. Details of how Chinese President Xi Jinping’s government runs its surveillance and detention policies in its north-west region, Xinjiang, have emerged via a cache of secret documents. The files were obtained by the International Consortium of Investigative Journalists (ICIJ) and collectively published by a group of journalists from 15 media partners.

Independently verified by China experts, the documents in their essence form a manual of guidelines for those in charge of running Xinjiang’s vast network of concentration camps. Human rights groups say more than a million Uyghur Muslims have been detained in the camps alongside other Muslim minorities.

While China has continued to insist these camps are “vocational training centers”, these documents, with their comprehensive stipulations to build ultra-high-security complexes where no movement by any inmate goes unnoticed, confirm that China has built perhaps the most complex and closely-guarded detention network in the world.

The documents include nine pages of Chinese-language guidelines to managing the camps, which had only been operational for a few months at the time of publication. The latest leak also includes four intelligence briefings, or bulletins, which provide guidance on running Xinjiang’s massive program of surveillance and policing which have transformed the region into an extensive grid-like network of digital control.

According to the leak, camp workers are instructed to “prevent escape” by employing watchtowers, patrols, surveillance cameras and alarms. The papers demand that cameras be used 24-7 and “with no blind spots.” The camps were to be built as a complex network of security, with fencing, locked doors, and an on-site police station at the entrance.

In response to the leaks, the UK Foreign Office has demanded China give the UN “immediate and unfettered” access to the camps. The Foreign Office issued a statement saying it had “serious concerns about the human rights situation in Xinjiang and the Chinese government’s escalating crackdown, in particular the extra-judicial detention of over a million Uyghur Muslims and other ethnic minorities.”

We went through the leaks to bring you some context:

“There must be full video surveillance coverage of dormitories and classrooms free of blind spots, ensuring that guards on duty can monitor in real time, record things in detail, and report suspicious circumstances immediately.” Page 2, the China Cables

The documents lay out their vision of the camps as impossible to escape, where the personnel “block security loopholes in a timely manner.” The documents stipulate the inmates’ every movement be handled with the utmost stricture: each inmate has a “fixed bed position, fixed queue position, fixed classroom seat and fixed station during skills work, and it is strictly forbidden for this to be changed.”

In context:  As first revealed via satellite imagery unearthed by researcher Shawn Zhang in 2018, many of Xinjiang’s camps were built in the middle of the desert, making it difficult to survive even if inmates did manage to escape. “It was a kind of Alcatraz,” journalist and academic Olsi Jazexhi told me of his press trip to one of the so-called “re-education camps” in August. “Even if they could climb the walls and jump they would be dead in the desert.

The details of China’s brainwashing policy in Xinjiang are also laid bare within the papers:

“Promote repentance and confession of the students for them to understand deeply the illegal, criminal and dangerous nature of their past behavior. Pay attention to the development of psychological counseling and bring psychological correction education into play.” – Page 3, the China Cables

The documents refer multiple times to the “criminal” nature of the camps’ inmates, a claim refuted by testimonials of dozens of Uyghurs who have managed to escape. The papers stipulate that inmates be subject to a points-based system tracking their behavior and assessing their progression in “ideological transformation, study and training, and compliance with discipline.”

In context: Since 2014, the government in Xinjiang has staged a mass crackdown on its Muslim minority population, following several bouts of Uyghur-led separatist violence in the region. China wants to combat what leader Xi Jinping terms “the three evils”: terrorism, extremism and separatism. “Round up everyone who should be rounded up,” Xinjiang’s regional leader, Chen Quanguo, told local authorities.

According to testimonials from Uyghurs who have escaped Xinjiang, the slightest indication of religious devotion, such as having a Quran in the house, was enough to get a Uyghur arrested. “My friends and neighbors cautioned me not to turn on the light at night. If you even turned on the light to go to the bathroom, they would suspect you of praying. It was forbidden,” Amina Abduwayit, a Uyghur businesswoman who left Xinjiang in 2015, told me in an interview last year.

According to Gulbahar Jalilova, a Uyghur-Kazakh woman who was held in several detention centers in Xinjiang’s capital Urumqi for more than a year, her fellow inmates’ crimes included having WhatsApp on their phone, asking their son to pick up matches from the market, or making contact with someone outside China.

In context: Most Uyghurs speak their native Uyghur language, rather than Mandarin, in Xinjiang. Pushing Uyghurs to learn Mandarin while stamping out the Uyghur mother tongue has formed a major part of the crackdown. Reports from Xinjiang show the language is gradually being erased from the region, with Uyghur bookshops shuttered and only the “national language” permitted in Xinjiang schools.

Through letter writing, phone calls, video chats, visits, meetings, meals, etc., establish a mechanism for students and relatives to interact with each other, to ensure that the students will have a phone conversation with their relatives at least once a week, and meet via video at least once a month, to make their family feel at ease and the students feel safe. Page 4, the China Cables

Evidence from Uyghur testimonials outside China says this stipulation has been widely ignored: most Uyghurs in the diaspora have not heard from their families in the camps for more than two years.

Also part of the leak are four shorter “bulletins” which give insight into how Xinjiang conducted its detention activities via algorithm. The government created an artificial intelligence system called the “Integrated Joint Operation Platform” to collect huge troves of personal data about its Uyghur population to determine if an individual should be classed as “suspicious”.

One bulletin details how, in June 2017, the system flagged nearly 25,000 “suspicious persons” in southern Xinjiang. It goes on to say how more than 15,000 were then sent to the camps, while around 700 were criminally detained, with 2,000 placed under “preventative surveillance.” A remaining 5,000 were “temporarily unable to be detained.”

Stay on the story of China’s crackdown on its Muslim minorities: