Hundreds of protesters have taken to the streets angered by the results in Kazakhstan’s snap election which crowned their long-time leader’s hand-picked successor as the new president. So what did the Interior Ministry do? Arrest 600 demonstrators and label them as “radical elements seeking to destabilize society.”

Kazakh authorities are using a familiar disinformation playbook to crackdown on their citizens: Instead of examining accusations that the election was rigged, authorities blamed the anger about the election on “propaganda” posted on social networks.

The government crackdown has led to more protests — and unrest — as more Kazakhs call for the release of those arrested, which include journalists and a non-profit activist.

The protestors had called for a boycott against the snap presidential election, following a call by Mukhtar Ablyazov, the leader of banned opposition group Democratic Choice of Kazakhstan, who said the poll would be a sham with a predetermined outcome.

According to the Interior Ministry,  400 arrestees have already been tried and fined, while another 200 people arrested on June 10 are awaiting trial. Protests are illegal unless allowed by the government in Kazakhstan. Despite this, opposition groups are circulating messages, calling for more protests in the capital and the largest city Almaty on Wednesday when Tokayev is scheduled to be inaugurated.

The ministry said they targeted protestors who were active supporters of Ablyazov’s party, which “organized illegal meetings to destabilize the public situation during elections”

In a video posted on social media, Ablyazov said, “thousands of protestors” had gathered in Almaty’s Astana Square with chants of “boycott” and “police with the people”.

Kazakhstan’s longtime leader Nursultan Nazarbayev resigned in March after decades in power. The election saw the former president’s chosen successor, Kassym-Jomart Tokayev win with a sweeping majority of just over 70% of the vote, according to the government-approved “Public Opinion” exit poll.

Critics argued Tokayev’s leadership would mean there would be very little change from the previous administration. Nazarbayev, who had nearly three decades in premiership, remains the chair of the ruling party and retains his seat on the national security council, which he gave more power to before he resigned.

Kazakhstan has seen a rise in tension in the lead up to the election. On March 11, police arrested and subsequently fined Saniya Toiken, a reporter for the American-funded, Radio Free Europe/ Radio Liberty’s Kazakh language service after she interviewed protesters demanding better jobs. 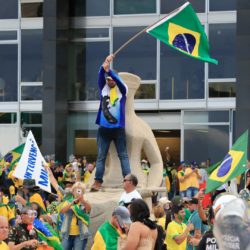