Germany stands up to China; self-censorship in the soccer world

Germany is calling for a global anti-China coalition. Yes, you read that right. Long dismissed as Europe’s diplomatic dwarf, the continent’s economic giant is beginning to think strategically.

Foreign minister Heiko Mass agrees, writing that dealing with China should be an opportunity for new transatlantic cooperation.

It’s part of a broader picture. Regarding Germany’s newfound foreign-policy awareness, Constanze Stelzenmüller notes in the FT “a new sense of urgency in Berlin.”

Talking point: Germans enjoy their anti-Americanism, particularly under this administration. But worries about China trump snooty feelings about the U.S. And whoever the next president is will need allies in dealing with Xi Jinping’s regime.

Not everyone has got the memo, though. The German Digital Forum next week convenes the country’s business and political elite to discuss “Democracy and the Digital Economy — the European Way”

One of the shindig’s “premium partners” (i.e. sponsors) is … Huawei, the Chinese tech giant whose equipment helps run the regime’s mind-control and surveillance systems, and is rapidly becoming a pariah in the advanced industrialised world. The latest countries to dump Huawei are Bulgaria and (via a deal with the US on 5G) Slovakia.

Why it matters: A strong European foreign and security policy is vital to global efforts to contain Chinese aggression — and nothing in the EU works without German backing. Unscrambling China’s deep rooted influence in Germany will be a hard, painful process.

China’s Helsinki embassy has complained wetly about Finland’s commendable decision to suspend its extradition treaty with Hong Kong. But it’s the party-state’s diplomats in Prague who win this week’s Wolf Warrior competition.

But capitalism offers China much greater influence. The Czech Republic’s richest man, the China-friendly tycoon Petr Kellner, is celebrating the imminent completion of a merger between his investment group PPF (a Huawei partner with a lucrative doorstep-lending franchise in China) and the CME Group, a media conglomerate active in Bulgaria, the Czech Republic, Romania, Slovakia, and Slovenia.

Only the paranoid would worry that Kellner’s past pro-China lobbying might influence some of the region’s most-watched broadcasters.

For more on how the Czechs are busting the Taiwan taboo, and its wider implications, read this analysis by Ivana Karásková.

And for more on the United Front Work Department’s mobilization of the Chinese diaspora in central Europe during the pandemic, read this from Filip Šebok, Ivana’s colleague at the excellent CHOICE think tank in Prague.

AliExpress, a Chinese e-commerce giant which is tussling with Amazon and the local Allegro platform in Poland, is sponsoring the soccer team Lech Poznan.

Polish fans may want to read this long New York Times report on what happened to the Arsenal star Mesut Özil when he tweeted support for the Uyghurs languishing in Chinese mind-control camps.

Why it matters: Hollywood already imposes Chinese self-censorship. Sport is going the same way. People who run big Western clubs will sacrifice their stars to avoid losing access to the huge Chinese market

Back in 2013, Romania’s deal with China to complete the Cernavodă Nuclear Power Plant was a highlight of the then 16+1. Now that’s history — the agreement was cancelled early this year and the contract has gone to the Americans.

Disappointment with Chinese infrastructure politics is also behind a drop in the PRC’s popularity elsewhere. Eurasianet reports on polling by Central Asia Barometer, one of the few independent pollsters based in the region, which shows increasing skepticism in once-enthusiastic Uzbekistan, while in Kyrgyzstan, locals are objecting to pollution from a Chinese-owned refinery.

Why it matters: Chinese gambits on transport, energy and construction often grab headlines but don’t deliver. Determined, focused Western diplomacy — exemplified in Romania’s case by the U.S. Embassy in Bucharest and Department of Energy — can see off the competition.

What we’re watching: U.S. Deputy National Security Adviser Matt Pottinger’s brilliant speech, delivered in Mandarin at the Policy Exchange think tank in London, had many zingers — about C. S. Lewis, Anne-Marie Brady’s silencing in New Zealand, the plight of the Uyghurs and the threat posed by the United Front Work Department.

But the best line was this

Near the end of the 18th century, across the water and many miles from England, a group of visionary men drew up a constitution.  The document they framed was designed to limit the powers of government, assert the rights of the people, and chart a path toward what they hoped would be a lasting democracy.

Pottinger was talking about …. Poland. Full marks for that unusual but apt historical perspective on the discussion about modern China.

(How good is Pottinger’s Chinese? — the answer’s here)

What we’re reading: The great Didi Kirsten Tatlow’s Newsweek exclusive on China’s interference in US politics

What we’re listening to: Mareike Ohlberg (co-author with Clive Hamilton of the must-read Hidden Hand) with Christopher Walker and Shanthi Kalathil of NED on “China, the Party, and the World” (30-minute podcast).

That’s it from us — we’ll be back in your inbox this time next week. 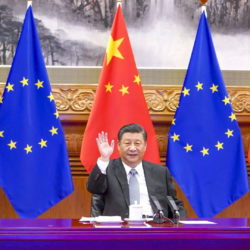