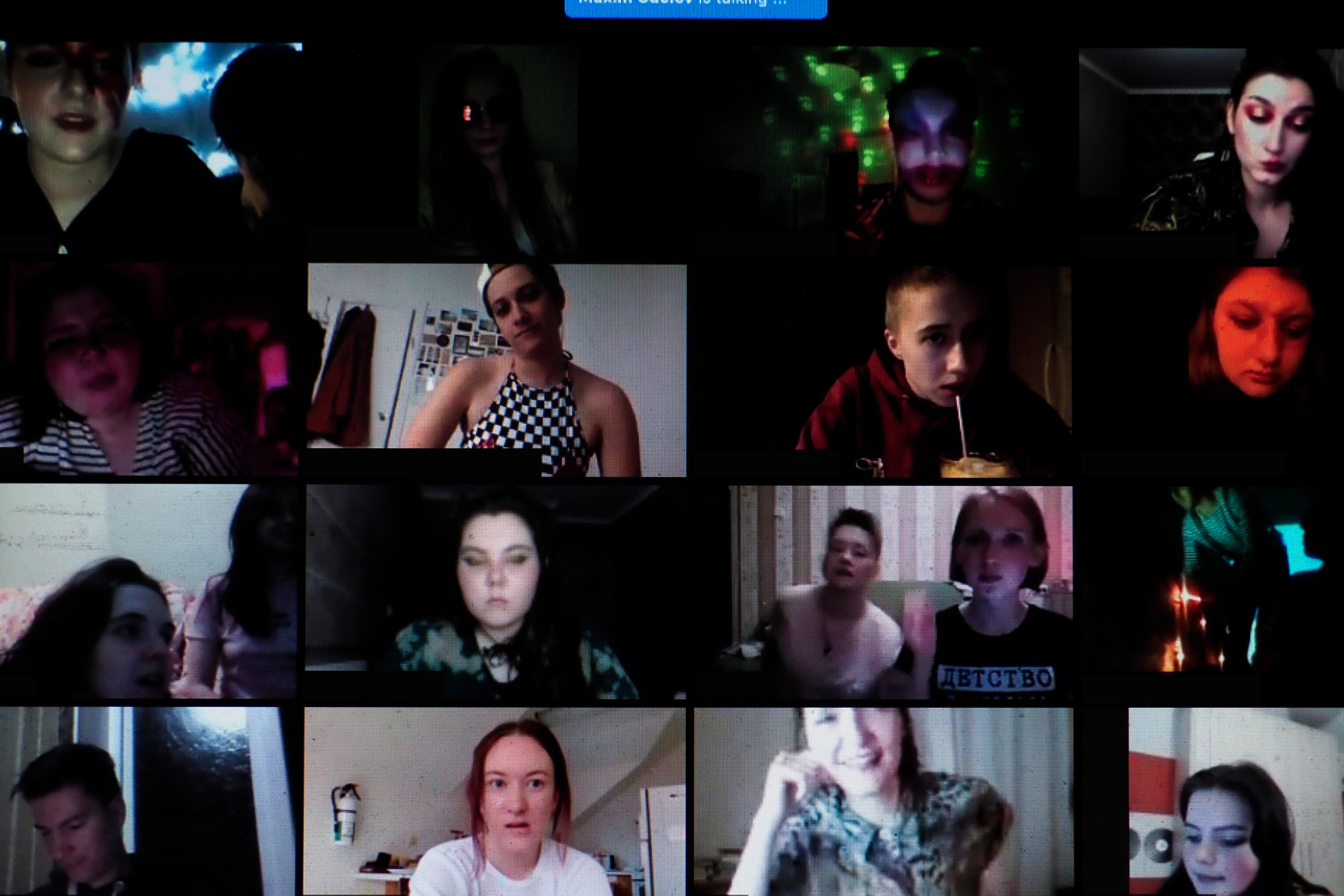 Under lockdown, LGBTQ Russians were more isolated than ever. Then, the Zoom parties started

Everyone who appears in these photos gave their verbal consent to have their picture taken.

The apple trees are blossoming outside Antonina’s window. She has been quarantined, alone in her apartment, for almost two months.

Antonina is 23 years old. She doesn’t identify as male or female, and accepts any pronoun people assign to her. She has cropped dark hair and talks softly during our video chat.

“Yesterday, on the street, a little boy called me ‘lady’ and an old lady called me ‘boy,’” she told me.

Before the lockdown began, life in Yekaterinburg, a city to the east of Russia’s Ural mountains, often threw up these situations for Antonina. She asked to be referred to by her first name only, for fear of repercussions.

“The society in Yekaterinburg is not exactly tolerant,” she explained.

In Russia, members of the LGBTQ community have long faced hostility, ignorance and abuse both outside and within their own families.

As Russia’s Covid-19 cases have rocketed to more than 414,000 – the third-highest infection rate in the world — a strict lockdown has been imposed across the country. Those measures have exacerbated Antonina’s feelings of isolation.

“Self-quarantine is quite hard for me. I live completely alone and I get lonely,” she said.

Unexpectedly, the early days of the lockdown also offered an opportunity to Antonina and many others. A LGBTQ-friendly festival had been planned for April in a St Petersburg warehouse complex. Rather than cancel it, the organizers decided that the three-day event would take place over Zoom.

In previous years, Znakravenstvafest – which takes its name from the Russian for “sign of equality” – had been hugely successful with the community.

“People felt they were in a different world – a different universe,” Nastia Dyakova, one of the organizers, told me during a recent video call.

When the lockdown began, the organizers realized that holding a physical iteration of the festival was no longer possible. So, using the Russian social media platform VK, they began to advertise it as a ticketed online event.

On April 12, hundreds of people logged in to Zoom. The organizers asked attendees to shout out where they were from. The chat pinged with cities and regions all over Russia, the former Soviet Union and beyond.

“People weren’t afraid to turn their cameras on,” said Dyakova. “They were dancing in their underwear, waving LGBTQ flags, and the atmosphere of acceptance was fully present.”

The 350-person gathering provided many young people with a means to escape the claustrophobic situations they had suddenly found themselves in.

“I remembered that cleansing feeling of walking into a space and realizing people are like you,” said Alina, 21, who attended the festival from her bedroom in Karelia, northwest Russia and preferred I use just her first name.

The freedoms of the LGBTQ community in Russia are limited by both society and law. For instance, in 2013, Vladimir Putin’s “gay propaganda” legislation enshrined longstanding homophobic attitudes in law by banning the “promotion of nontraditional sexual relations to minors.”

In practice, the law means that people under the age of 18 no longer have access to educational resources about sexuality. Activist groups like Human Rights Watch also report that these measures have contributed to a growing lack of mental health, legal and psychological support services for members of the LGBTQ community.

Russians will go to the polls on July 1 to vote on a constitutional amendment that will allow President Vladimir Putin to remain in power until 2036. On Tuesday, pro-Kremlin media released an anti-gay campaign video, warning viewers to vote for the amendment or face a country where same-sex marriage and adoption by gay couples is allowed. The video showed an orphan boy finding out he’s being adopted by a make-up wearing man. “Is this the Russia you’re voting for?” the video ends, as the couple embraces. The clip attracted hundreds of thousands of views – and harsh criticism. But the homophobia and prejudice it upholds are everyday realities for LGBTQ Russians like Antonina.

For Antonina, the festival — which included lectures, discussions and breakout rooms, all on Zoom — was eye-opening.

“I realized there were so many people from the community,” she said. “There was a lecture on activism that really inspired us all to get engaged with the LGBT community in our cities.”

For the first day of the festival, Antonina left her camera off, feeling safer watching anonymously.

“On the second day, I got really into it. I turned my webcam on and was having fun with everyone else. I was smiling and started writing into the chat,” she said. Soon, she was dancing in full view of everyone.

Gayza, 20, another festival attendee who asked to be identified only by her first name, is quarantined in the western city of Izhevsk with her parents. They don’t know that she identifies as queer.

“I’m still financially dependent on my parents,” she said. “I’m trying to figure out if they’d accept me. I’ve been trying to test the waters.”

Gayza added that her parents consume a steady diet of state media, via which the government’s anti-LGBTQ narratives are widely spread.

“My mother repeated some propaganda to me about same-sex marriage,” she told me. “She said, “how awful!”.”

Gayza had never been to an online or queer party before Znakravenstvafest. She stayed in her bedroom for three days, worried her parents might walk in because there was no lock on the door.

“I told them not to disturb me,” she said. “I said it was educational, about feminism, and my mum didn’t react well. For her that’s the same thing as saying “queer.” She was like, ‘Don’t get yourself into a sect.’”

For the duration of the festival, Gayza joined her family only at mealtimes. Often, she found the lectures so interesting that she didn’t want to tear herself away.

“My parents would get offended – “how is it possible?” they said. They couldn’t understand what was so important that I had to miss lunch.”

Since Znakravenstvafest, smaller LGBTQ and sex-positive Zoom parties have been happening every weekend in Russia. The security can be strict.

Kinky Party is a Moscow-based sex party that welcomes people of all genders and sexual orientations. At its recently launched online events, there are queues to get in, and virtual doorstaff check names off against a list. On entry to the Zoom call, guests must introduce themselves to the host, or be unceremoniously kicked out.

Despite hosting an altogether different kind of event, the people behind Znakravenstvafest also have to be careful. If the festival inadvertently admits someone under the age of 18, the organizers could face criminal charges under the propaganda laws. Meanwhile, LGBTQ-friendly events are constantly under threat of being hijacked or crashed by homophobic groups.

“We’re always trying to avoid the risk of the government approaching us or sanctioning us in any way,” said Dyakova, the festival’s organizer.

But they believe the risks to be worth it. After the online event, Znakravenstvafest set up a Telegram chat, via which young people from all over Russia and the wider world could continue to talk.

We are staying on the story of Russia’s anti-LGBTQ campaign. Last month, reporter Katia Patin examined how the laws forced one Russian YouTuber to flee the country.

Dyakova cried at the messages she received. Even over the internet, the festival had built a whole new universe.

“The world we managed to create really was less violent and more accepting,” she said. “It was more open-minded than our reality.”

It has also paved the way for other online gatherings.

Maxim Cuclev is an activist and filmmaker from Chisinau, Moldova, who has strong links with the Moscow queer scene and has made documentaries about LGBTQ life in his own country.

Along with about 50 people from Russia, Moldova and Europe, I attended a Spring Queerantine party he co-hosted with fellow Moldovan activist Paula Cerescu in early May. Cuclev painted his face in what he described as “acid harlequin” makeup. Green disco lights bounced off the wall behind him and a patchwork of Zoom windows showed other faces lit in orange, pink and blue.

Slava Rusova, a young non-binary musician quarantined with her mother in the Moscow region, stared through the camera with a languid expression, wearing a white tank top. The screen lit up her pale face.

“Since we were born, we’ve been in self-isolation,” she said. “But it’s harder right now. We can’t be together with our friends.”

However, Rusova added that the online gatherings do feel more secure than LGBTQ events in the real world. “You can just push the button and the person that’s trying to bully you goes away,” she explained.

Photos by Thomas Dworzak, a photographer and current president of Magnum.

Correction: The anti-gay ad was run by a pro-Kremlin outlet, not state media as stated in a previous version of this article.

dispatch
Isobel Cockerell
Left in limbo: a Pakistani man has spent the last month trapped in a Mexican airport